The Founder’s Award is a way of recognizing individuals who have significantly contributed to the field of probation in general, and specifically to the POPAI organization. The recipient need not be a Probation Officer or POPAI member. The selected person, however, shall be characterized by his/her commitment of influence and promotion of professionalism to Indiana probation. Previous award winners include Judge Vicki Charmichael, Glenna Shelby, Tom Frederick, George Walker, Bruce C. Embrey, Charles Bud Meeks, Linda Parks, Greg Werich, Eric Zimmermann, Jane Seigel, Neil Hannon, and Susan Rice. 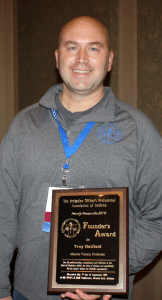 Troy started as a juvenile probation officer in Owen County in 1998. He moved to Monroe Circuit Court Probation in 2004 where he quickly moved into leadership and supervisory roles. He became the community corrections supervisor in 2006 and was promoted to deputy chief in 2009. Troy has previously served as the Chair of the Probation Officer’s Advisory Board (POAB) and has served as an instructor at the State Probation Officer Academy. He has made presentations for the National Institute of Correction and to the Indiana General Assembly. He is also involved in the Indiana Evidence Based Decision Making Initiative, Justice Reinvestment Advisory Council, and Case Plan Technology Committee.

Sarah Lochner, Director of Court Services in Wabash County, states “Troy is an excellent POPAI board member and advocate for probation who is extremely committed to the improvement of our profession.”

Judge Mary Ellen Diekhoff of the Monroe Circuit Court V states that Troy’s “performance of duties is exemplary. He is highly regarded by all who know him for his knowledge, skills, integrity and professionalism. He is one of those individuals who is willing, and frequently does, go the extra mile. He is highly respected by both those within his department and those he works with outside of it. The members of our County Council have frequently expressed their appreciation for his assistance and expertise.”

Linda Brady, Chief Probation Officer of Monroe Circuit Court Probation, states “anyone who knows Troy knows that he is very thoughtful and analytical. When Troy speaks, his opinions are well thought out and researched.”

Finally, Thomas Rhodes, Assistant Chief and Community Corrections Director in Monroe County, states “Troy is a role model for probation leadership. He is a go-to person to turn ideas into reality. He quickly becomes an expert in a vast variety of subjects important to our profession.”