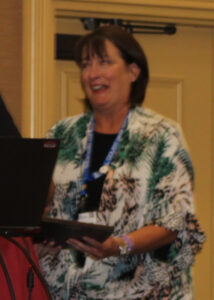 The “Founder’s Award” is a way of recognizing individuals who have significantly contributed to the field of probation in general and specifically to the POPAI organization. The recipient need not be a Probation Officer or POPAI member. The selected person however, shall be characterized by his/her commitment of influence and promotion of professionalism to Indiana probation.

Linda Brady, Chief Probation Officer, states “Susan has been a leader in Indiana probation since the start of her career. Susan started her probation journey in 1981 as a probation intern in Monroe County. After obtaining her B.A. from IU in 1983, Susan was hired as a substance abuse probation officer for this department in January 1985. Susan immediately made her mark on this department. She was highly motivated to seek out training opportunities and quickly became the resident ‘expert’ in all matters related to substance abuse and addiction. She was a great resource and provided training and mentoring to the adult probation officers who had previously never received any formal training related to alcohol and drug abuse.” Linda reports that when she (Linda) became a substance abuse probation officer in September 1985, Susan was not only a co-worker but more importantly, Linda’s mentor. Linda goes on to state “Susan is absolutely passionate about her work. She is a team player and is always willing to put the good of the department above her personal feelings. Susan leads by example. She works very hard and expects her staff to work just as hard for the clients. She gives her staff her time, energy and support. Just as she was a leader when she was a line probation officer, Susan is the ‘gold standard’ for probation supervisors.” Linda indicates that Susan has been active in the community and at the state level as a member and/or leader of several committees. Also noted was the fact that Susan was the recipient of the Order of Augustus Award in 2007. Linda concluded by stating “Susan is more than an excellent probation officer, probation supervisor, and Court Alcohol and Drug Program Director. Susan is a truly exceptional, caring, and humble human being.”

Susan’s staff added “We, the probation officers of the Monroe Circuit Court, could write all day on her accomplishments professionally and personally. We feel that she demonstrates the best qualities of a probation officer on a daily basis by tirelessly helping probationers find their own path to success. She also gives the probation staff the same high level of attention and assistance.”