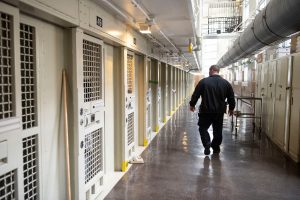 Robert Alexander has been away from home for more than a decade. His days and nights are spent locked up behind walls topped with barbed wire.

“Prison kind of gives you that feeling that you’re like on an island,” says Alexander, 39, who is studying for a bachelor’s degree in biblical studies while serving his third prison sentence.

Clad in an oversized gray sweatshirt under the fluorescent lights inside the visiting room of Wisconsin’s oldest state prison, he is more than 70 miles from his last address in Milwaukee.

“You don’t feel like a resident of anything,” he adds.

But if Alexander and his more than 1,200 fellow prisoners are still incarcerated at Waupun Correctional Institution next Census Day — April 1 — the Census Bureau will officially consider them residents of Waupun, Wis., for the 2020 national head count.

That’s because, since the first U.S. census in 1790, the federal government has included incarcerated people in the population counts of where they’re imprisoned. This technical detail of a little-known policy can have an outsized impact on prison towns across the U.S. for the next decade.