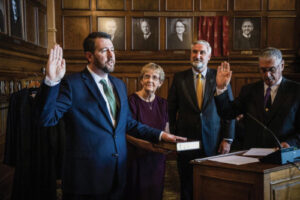 Newton Circuit Judge Daniel Molter administers the oath of office to his son, Hon. Derek Molter, with mother, Kate Molter, holding the bible, and Gov. Eric Holcomb standing in participation after passing his duties to swear in the new justice to his proud father.

When the Court of Appeals of Indiana held a celebratory party for Judge Derek Molter, Chief Judge Cale Bradford jokingly told the room he had decided to deny the transfer! Molter is described by the Judicial Nominating Commission “as possessing a thoughtful, sharp mind” and as a person “who maintains a steadying and evenly tempered voice.” With such accolades, it’s no surprise Molter made a positive impact on his fourteen colleagues, making his ascension to the state’s highest court bittersweet for them.

Governor Holcomb appointed Molter to the Court of Appeals to replace the Honorable James S. Kirsch. Since taking the bench on October 1, 2021, Judge Molter has authored over one hundred decisions and participated in panels deciding more than 200 other appeals. In addition to his judicial work on the appellate court, Molter’s broad legal background includes government-related work that helped shape his interest in public service.