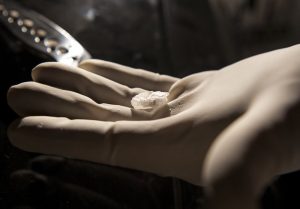 Methamphetamine, an illegal drug that sends the body into overdrive, is surging through the United States. Federal drug data provided exclusively to NPR show seizures of meth by authorities have spiked, rising 142% between 2017 and 2018.

“Seizures indicate increasing trafficking in these drugs,” says John Eadie, public health coordinator for the federal government’s National Emerging Threats Initiative, part of the High Intensity Drug Trafficking Areas program. “So if seizures have more than doubled, it probably means more than double trafficking in methamphetamines. And with that go additional deaths.”

Overdose deaths involving meth and other psychostimulants did rise last year — by 21% (to 12,987 from 10,749 in 2017) — according to provisional data from the Centers for Disease Control and Prevention. Deaths from cocaine and fentanyl were up too. But overdose deaths dropped overall because of a decline in the number of fatalities tied to pain pills.

For decades, meth has been associated with working-class Americans trying to hold down two or more jobs and has been popular in some gay communities, but it hasn’t been widely available in every region of the country. Now that’s changing too. Seizures of meth are up, sometimes dramatically, in pockets of nearly every state in the U.S., based on data collected in 32 High Intensity Drug Trafficking Areas.