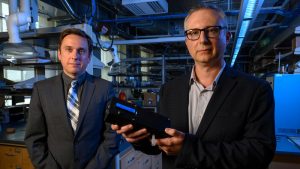 The alcohol Breathalyzer came to life slowly, over the course of decades.

From the 1930s through the 1960s, scientists, lawmakers, police and the public quarreled over the veracity of the numbers spit out by the device, the appropriate legal limit for drivers and whether they could trust a machine over a cop’s testimony.

Today, the same debate is playing out over cannabis.

As 33 states and the District of Columbia have legalized pot in some form, Breathalyzer-type devices that could theoretically aid police enforcement have begun appearing in various stages of development. But legal experts and scientists say there’s a long way to go before those devices can actually detect a driver’s impairment.

Last week, a team of researchers at the University of Pittsburgh announced the latest tool to detect THC — delta-9-tetrahydrocannabinol, the main psychoactive component in pot — in breath.

The university’s Star Lab, led by Alexander Star, began developing the box-shaped device in 2016, in the midst of a wave of pot legalization across the United States. Star, a chemistry professor, partnered with Ervin Sejdic, a professor of electrical and computer engineering who’s also at the university, to build the prototype.

The device uses carbon nanotubes, which are 1/100,000 the size of human hair, to recognize the presence of THC, even when other substances are in the breath, such as alcohol. The THC molecule binds to the surface of the tubes, altering their electrical properties.

“Nanotechnology sensors can detect THC at levels comparable to or better than mass spectrometry, which is considered the gold standard for THC detection,” says the news release from the university’s Swanson School of Engineering.