Bureau of Justice Statistics on December 2021 by Danielle Kaeble 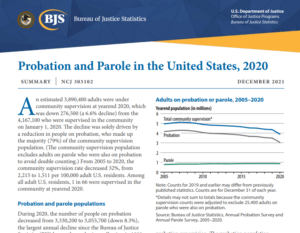 This report is the 29th in a series that began in 1981. It includes characteristics of the population such as sex, race or ethnicity, and most serious offense of adult U.S. residents under correctional supervision in the community. The report details how people move onto and off community supervision, such as completing their term of supervision, being incarcerated, absconding, or other unsatisfactory outcomes while in the community. Findings are based on data from BJS’s 2020 Annual Probation Survey, Annual Parole Survey, and Federal Justice Statistics Program.