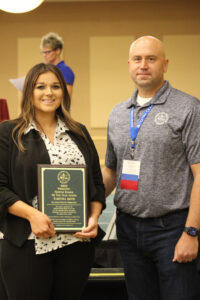 Tabitha Davis, of Hancock County Probation, is
awarded the “Rookie Probation Officer of the Year Award”

This award was established in 2014 to recognize probation officers who, while at the beginning of their career, show the attitude, aptitude, and the desire to improve themselves and to develop into leaders among their peers.

Chief Probation Officer Joshua Sipes states “Ms. Davis has had quite the journey in order to reach our department, including stints in our county’s Prosecutor’s Office, Clerk’s Office, and the Hancock County Jail as a corrections officer. She began her career in probation as the adult division’s receptionist. She started as a probation officer on January 1, 2022. She breezed through orientation as well as the certification exam, and quickly made use of her talents in working with a tough population of offenders. One would think she would be satisfied but she has not slowed down. She asked for funds to take a grant writing class and did so. She has since written a grant for and started a Parenting Group specific for our criminal offenders. She has been certified in teaching the class and does so weekly. She has also written and won a second grant from our

local community foundation in order to provide greater access to treatment for our probationers. In a little over six months, she has added to the productivity and usefulness of our entire department.”

Her supervisor, Nick Layman, echoes much of Mr. Sipes’ sentiment. He further states “Since transitioning into her role as a probation officer, she has exceeded all expectations. She has spent significant amounts of time doing training, obtaining supplies, organizing and teaching our parenting class. All this in addition to maintaining a case load of domestic violence offenders. Ms. Davis is passionate about her job and goes the extra mile to help her offenders.”

Judge R. Scott Sirk of the Hancock Circuit Court states “Tabitha has been an outstanding addition to the team here in Hancock County. She has exhibited great initiative and enthusiasm that has assisted Hancock County immeasurably since she has been hired as a probation officer.”Congratulations Tabitha!