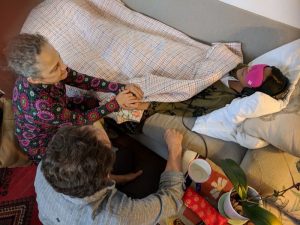 The first time Lori Tipton tried MDMA, she was skeptical it would make a difference.

“I really was, at the beginning, very nervous,” Tipton remembers.

MDMA is the main ingredient in club drugs ecstasy or molly. But Tipton wasn’t taking pills sold on the street to get high at a party.

She was trying to treat her post-traumatic stress disorder, with the help of licensed therapists.

Tipton was given a dose of pure MDMA. Then she lay down in a quiet room with two specially-trained psychotherapists, one woman and one man.

They sat next to Tipton as she recalled some of her deepest traumas, like discovering her mother’s body after a murder-suicide.

“In the embrace of MDMA,” as she describes it, Tipton could revisit this moment without the usual terror and panic.

“I was able to find such empathy for myself. I realized how much I was thinking this was my fault,” she says.

The synthetic psychoactive chemical MDMA is emerging as a promising — if unconventional — treatment for PTSD.

Scientists are testing how pharmaceutical-grade MDMA can be used in combination with psychotherapy to help patients who have a severe form of PTSD that has not responded to other treatments. Unlike street drugs which may be adulterated and unsafe, researchers use a pure, precisely dosed form of the drug.

It’s not yet available as a treatment for PTSD outside of clinical trials, but the success of early trials has proponents hopeful that the therapy could be available to more people in coming years. They’re aiming for approval by the Food and Drug Administration, which granted breakthrough therapy status to MDMA-assisted psychotherapy in 2017.