The Boone County Probation Department on 7/31/2022 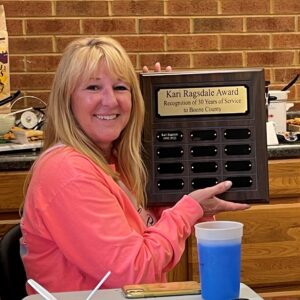 After 24 years as a respected Boone County probation officer, Kari Ragsdale has retired as of August 1, 2022.

Her career began in February of 1992, as an administrative assistant, moving to a probation officer position in March of 1998.

In 2002, Kari was appointed Chief Probation Officer and took on the role of Work Release Coordinator.

Kari oversaw the consolidation of two probation departments into one unified probation department in 2008; and in 2008, Kari contributed to the creation of Boone County Community Corrections where she served as Executive Director until 2015. Kari has served as Chief Probation Officer under seven judges during her tenure.

Kari is enjoying her retirement at Torch Lake, Michigan spending time with her family and friends, and we wish her the best of luck and a relaxing retirement. She will be greatly missed by all staff members.