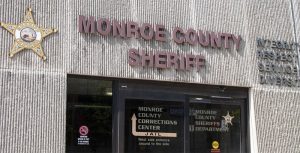 IU is working with the Monroe County Circuit Court Probation Department to decrease the number of people sent to jail over probation violations as part of a nationwide study conducted to reduce mass incarceration.

When people are on probation, if they break any of the rules, such as not showing up for appointments, they are sent to prison.

Troy Hatfield, the Deputy Chief Probation Officer for Monroe County said they want to reduce the number of people on probation being sent to jail, and to do that they will need to create strategies based on their research.

IU is collaborating with Monroe County to analyze instances where people on probation were sent to jail to create solutions for reducing incarceration rates.

Hatfield said they’re going to look at data from 2014 to 2018 and pinpoint the ways that people on probation violated the guidelines and were sent to jail.

Arnold Ventures, a research philanthropy group, is funding the study. It is being conducted by the City University of New York Institute for State and Local Governance and is taking place in 10 cities across the United States.

“A huge number of people are in community supervision,” said CUNY senior research associate Victoria Lawson. “It’s ballooned in the past decade.”

It’s up to 2% of the population, Lawson said.

“The idea is that each of these 10 places is going to publish a research report and come up with a strategy for reducing revocations,” Lawson said. “We want them to create a proposal based on their own situation.”

“The county has been trying to reduce mass incarceration by putting them on probation instead,” Bohmert said. “We have a lot of people on probation, which is costly,and people are failing.”

She said many people run into issues with the financial obligations, such as paying probationary fees and participating in urine tests. Sometimes they end up committing other crimes while on probation, sending them to jail.

Bohmert said Bloomington is a great place for this study to be conducted because of Monroe County’s computer system, which has a large amount of detailed information regarding cases.

“We’re looking at people who failed, why some people have failed and succeeded, and can we create those successful conditions,” Bohmert said.