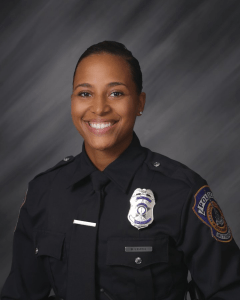 An Indianapolis Metropolitan Police Department officer was shot and killed and a female was injured Thursday afternoon on the east side of Indianapolis, according to IMPD.

The incident happened around 3 p.m. in the 1800 block of Edinburge Square, near 21st and Franklin.

Officers were called to the apartment for a domestic incident, IMPD Assistant Chief Chris Bailey said. When they arrived, shots were fired and the officer and a female inside the apartment were shot.

She was a member of IMPD’s 16th Recruit Class and has been with the department for two years.