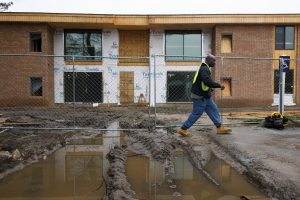 In 1998, Ichard Oden committed a crime that got him sent away for two decades. He was 19.

He got out of prison in February. Today, he’s a 40-year-old man with very little job experience.

As it turns out, Oden is coming back into society at a time when the economy is booming and attitudes toward people with criminal records are changing.

Unemployment in the Detroit metro area has fallen dramatically, to 4.4% from more than 17% just 10 years ago. Nationwide, it’s dropped to a 50-year low of 3.6%. Many employers say they can’t find enough workers. And for Oden and 20 million or so Americans with a felony record, that might mean a much better shot at getting a job and reintegrating into society.

In an increasingly polarized America, the reintegration of felons is a rare issue that has brought together people from very different political backgrounds.

The Obama administration launched the Fair Chance Business Pledge to eliminate barriers for people with a criminal record. Part of that initiative was “banning the box,” the part of a job application that asks if prospective employees have a criminal record. Companies including Google, Starbucks and Coca-Cola signed the pledge. And so far, 35 states have adopted a version of the ban.

With the First Step Act, the Trump administration also has committed to improving the lives of people with criminal records, including offering better education programs to prepare them for release. Jared Kushner and Ivanka Trump have made it one of their marquee causes.