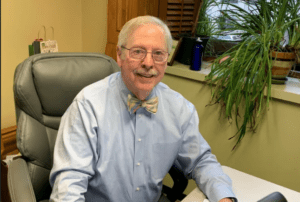 After 43 years as a distinguished Tippecanoe probation officer, Joe Hooker will retire later this month.

Among his accomplishments, Hooker worked with David Kuebler in 1988 to establish the Tippecanoe County Community Corrections Program and served three terms as the chairman of the advisory board.

Later named Corrections Manager of the Year in 1993 by the Indiana Correction Association, he served as the Chief Probation Officer in Tippecanoe County for 11 years; three terms as the District Six representative for the Probation Officer Advisory Board and two terms as the Chairman; three years on the Indiana State Legislative Study Committee on Probation; and has been a member of POPAI since 1987 and served on the POPAI board.

Heavily involved as a volunteer and board member of the SURF Center, a local not-for-profit agency that provides twelve-step programs for alcohol and drug users, Hooker is also a musician and has performed in the free summer concert series with the Purdue Alumni Band.

In the March Board Meeting, Joe was unanimously approved for POPAI Life Membership. He will receive official notification on April 1.