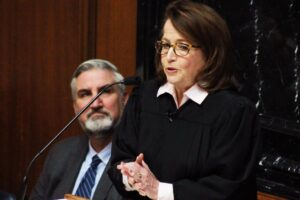 Indiana Chief Justice Loretta Rush reflected Wednesday on the progress the state court system has made as she delivered the 2023 State of the Judiciary.

It was Rush’s ninth such address and she harkened back to her first speech as chief justice as she praised the effectiveness of Indiana’s specialized, problem-solving courts – like veterans, mental health and drug courts. Since that time, such diversion courts have doubled.

Rush invited back a veterans court graduate that she honored at her first State of the Judiciary, Christopher Bunch, to underscore the programs’ impact.

“He’s married, with children. His family just bought their first house,” Rush said. “He owns a construction company and he has been sober for nine years.”

Rush also looked ahead, encouraging lawmakers in their work to address mental health in Indiana, particularly through use of the new, 988 crisis response hotline.