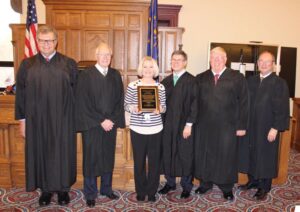 ALBION — She admitted it — Stacey Beam was expecting the worse when called to the Noble County Circuit Courtroom Thursday afternoon.

Instead, she was recognized as one of the best.

Beam said she was “shocked” by the honor, and had come to the courtroom with some trepidation.

“It’s never good when you get a call from the judges,” Beam said.

Instead, she was greeted by her family, five current or former Noble County judges and her entire staff.