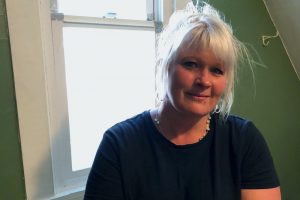 Melinda McDowell had used drugs since she was a teenager. But she didn’t try methamphetamine until one fateful night in 2017 after her mother died suddenly of a stroke. She went to a neighbor’s house and he had crystal meth.

“I tried it and I was hooked from the first hit,” McDowell says. “It was an explosion of the senses. It was the biggest high I’d ever experienced.”

Afterward, McDowell says, that big high started getting more elusive. But she kept using the drug frequently, and it took a toll. She went from 240 pounds to 110. Eventually, she lost custody of her children, who were put in foster homes. McDowell started having hallucinations.

McDowell tried many times to stop using meth, but when she’d quit for a few days, she’d have severe panic attacks and begin to shake uncontrollably. One night, she remembers lying on her bathroom floor thinking that if she didn’t get help, she’d die.

She heard about a woman named Nancy Beste who had recently opened the doors to a treatment center called Road to Recovery in Steamboat Springs, Colo., near where McDowell lived. McDowell says she begged Beste for help.

Beste, who’s a certified addiction counselor and physician assistant, says McDowell’s call came at a fortuitous time. She had just gotten back from a conference where she learned about research into what’s called medication-assisted treatment, or MAT, for methamphetamine users. Some early studies indicate that naltrexone, the same medication used to treat alcohol addiction and opioids, can work for some people addicted to methamphetamine.

Beste gave McDowell a prescription for naltrexone and signed her up for individual and group therapy. McDowell says that three to four hours after she took the first pill, she felt better. After the second pill, the withdrawals lessened.

“The shaking started going away. I wasn’t panicking. I could feel some relief,” McDowell says. “I knew there was something different.”

That was more than a year ago. McDowell is still sober today.