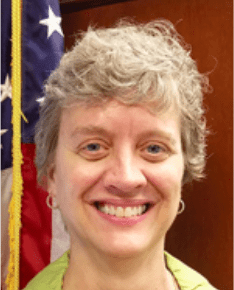 The Founder’s Award is a way of recognizing individuals who have significantly contributed to the field of probation in general and specifically to the POPAI organization. The recipient need not be a Probation Officer or POPAI member. The selected person however, shall be characterized by his/her commitment of influence and promotion of professionalism to Indiana Probation.

This year’s recipient is not a probation officer; however, she has been a big proponent of the efforts of POPAI to assure that Indiana Probation Officers are paid professional wages in accordance with their education and skill set. She is supportive and encourages all of her county’s probation officers to attend POPAI’s Annual Fall Conference. She also authorizes the payment of all the probation officer’s POPAI dues. Furthermore, she has supported POPAI in the past by being a guest speaker at the 2015 fall conference.

The 2018 Founder’s Award winner is Judge Vicki Carmichael from Clark County. Her nominators indicated that Judge Carmichael has worked tirelessly to assure that the probation department is fully staffed and funded. That she has supported and encouraged probation’s involvement in numerous statewide projects. And finally, Judge Carmichael’s Family Treatment Drug Court was recently awarded a 2.1 million dollar grant that will serve an additional 175 families in Clark County that are in crisis due to drug addiction.

On behalf of the POPAI Board, please join me in congratulating Judge Vicki Carmichael as this year’s Founder’s Award winner.