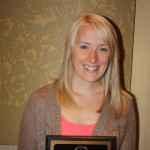 The 2015 POPAI “Rookie” Probation Officer of the Year Award was presented to Rachael Jones of Clark County Probation.  Rachael was hired by Clark County Probation in April of 2014 with the express purpose of conducting Pre-sentence Investigations.  According to her Chief Probation Officer Jamie Hayden, Rachael was an extremely quick study and eager to learn her job.  She is a dedicated professional with the sensibilities of someone who has been in the probation field for several years as opposed to one who has been here for 20 months.”  Judge Vicki Carmichael stated, “Rachael has prepared numerous Pre-sentence Investigation Reports for my court, and I have always found her work to be thorough, detailed, and on-point.  I cannot think of anyone more deserving of this award.”

Congrats to Rachael on this well-deserved recognition!