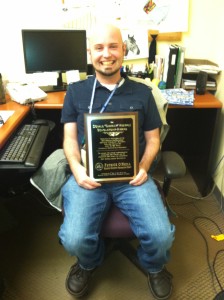 Patrick is presently in his third year of graduate school studying Social Work at Indiana University.  Through his education, Patrick is gaining a deeper understanding of mental illness and addictions.  He states that he will be using his degree to ensure that his clients and their families receive appropriate and effective services.

In the letters of support, Patrick’s Chief Probation Officer Christine Kerl stated that Patrick has demonstrated a strong commitment to his role as change agent with his clients and their families.  Deputy Chief Probation Christina Ball stated that Patrick has demonstrated independent decision making in his role as a school based and community based officer.