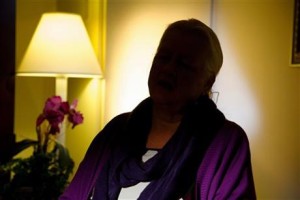 LITTLE ROCK, Ark. (AP) — On a hot Friday last July, a parolee was mowing a lawn in a small cul-de-sac on the west side of the city when he stopped to ask for a glass of water.

The 70-year-old widow whose yard he was mowing told him to wait on her porch. Instead, she said, he jerked the storm door open, slammed her against the wall, forced her into the bedroom and raped her. The parolee pushed her with such force, she said, that her front teeth were knocked loose.

Then he went back to mowing the lawn.

Milton Thomas, 58, said he’s not guilty. His trial is set for March.

Thomas has been in and out of Arkansas prisons since 2008 for nonviolent crimes, including check fraud. After he got out in November 2013, the state predicted he was a low risk to commit another crime, Thomas said, and assigned him the least amount of supervision.

His low-risk prediction would have been calculated based on answers to a lengthy questionnaire, the latest tool among the nation’s court systems to try to predict the likelihood that an offender will commit a crime again.

Across the country, states have turned to a data-driven movement to drive down prison populations, reduce recidivism and save billions of dollars. One emerging practice is the use of risk-and-needs assessment tools, which are questionnaires that explore issues beyond criminal history. They are based on surveys of offenders making their way through the justice system.

In a country with the highest incarceration numbers in the world, these questionnaires are a pillar of a new effort to get people out of prison. Repeat offenders are a major driver of bloated prison populations. But an Associated Press examination found significant problems with the surveys, which are used inconsistently across the United States, sometimes within the same jurisdiction.