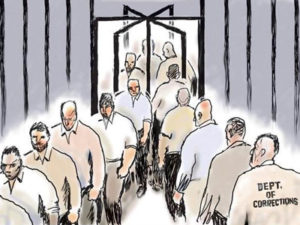 Failing a drug test, associating with felons and other technical parole violations are among the key drivers of prison’s “revolving door,” according to new UC Berkeley research.

The study, published this week in the Proceedings of the National Academy of Sciences journal, found that felons who served time behind bars were more likely to return to prison within five years of their release, compared to equivalent offenders who were sentenced to probation.

Moreover, it found that most of their later returns to prison were due to parole violations rather than new crimes.

“This study shows that the revolving door is primarily a product of post-prison community supervision rather than the commission of new felony crimes, as so many people become trapped in the criminal justice system’s accelerating cycle of surveillance and punishment,” said study lead author David Harding, an associate professor of sociology at UC Berkeley.

The results suggest that alternatives to imprisonment for parole violators, such as treatment programs or community service, might slow down prison’s revolving door, he said.

The findings shed new light on contributors to the soaring U.S. prison population which, according to a Pew Charitable Trusts report, saw a 700-percent increase between 1970 and 2005.

The full cost of incarceration in the United States has been estimated at over $1 trillion when factoring in prisoners’ diminished wages and job prospects, the socio-economic burden to families and communities as well as government operational costs, according to a Washington University study.

For this new study, researchers at UC Berkeley, the University of Michigan and the State University of New York at Albany analyzed the criminal records of more than 100,000 people sentenced for violent and nonviolent felonies in Michigan between 2003 and 2006, tracking them through September 2013.

The researchers’ statistical methods enabled them to determine the extent to which being sentenced to prison rather than probation increased the chances of a future felony conviction or prison term.

The results also showed a small decrease in crime during the time that the offenders were behind bars, and that after their release, they committed slightly fewer crimes than felons who had been sentenced to probation.

“One implication is that mass imprisonment is giving us less crime prevention than we might have assumed,” Harding said.

Parole violations include failing to complete certain programs, breaking curfew, failing a drug or alcohol test, associating with other felons, moving home or leaving the state without permission.

While not felony crimes per se, these breaches are subject to prison terms and, as this latest study shows, may play an integral role in the growth of prison populations, researchers said.

In addition to Harding, co-authors of the study are Jeffrey Morenoff and Anh Nguyen at the University of Michigan, and Shawn Bushway at the State University of New York at Albany.