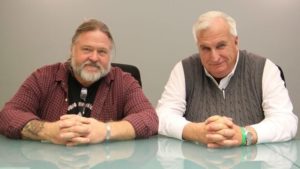 For most of his life when he was in between jobs, Tim Tulvey would toss his resume up on a hiring site like Indeed.com. He had decades of management experience working for landscaping companies, and even owned his own pest control business for a while.

“I was getting hits left and right,” Tulvey said, recalling previous times he’d posted. “I mean, there was companies reaching out to me a lot.”

But this time was different. This time, he had been through rehab, and picked up an assault charge. He didn’t get any bites.

For many with a history of addiction, finding a job can be tough. Of the 22 million adults in recovery in the United States, nine percent are unemployed — that’s more than double the overall rate. There are lots of reasons for this – addiction can cause people to go long stints without working, and that doesn’t look great on a resume. For others, like Tulvey, addiction goes hand-in-hand with jail time and a criminal record.

But that doesn’t necessarily make them less qualified for a job — or at least, that’s the logic behind a new hiring website called Retrofit Careers, designed specifically for people in recovery.

Tulvey was 50 years old when he decided he had to stop drinking. It had gotten bad — each day when he woke up, he knew he’d be drinking by lunchtime until he went to bed at night. He had no illusions that quitting would be easy — he checked himself into rehab and after, moved into a recovery house to get back on his feet. But he was homesick, and wanted to move back into his own place. As soon as he did, he started drinking again. One day, he blacked out and threw a glass at the wall, hitting his wife. He was arrested for assault and spent almost a month in jail.

Tulvey had been working as a warehouse manager for a construction company, and through rehab and the assault charge, his boss agreed to keep him on. But maintaining regular hours on probation can be tricky — as a condition of his release, Tulvey had to carry a breathalyzer that he was required to blow into at random times to give his bail officer a blood alcohol level. But, Tulvey says, often the machine didn’t work right. So, to prove he wasn’t drinking, he would have to take a train from his job in the northern suburbs of Philadelphia, into the city, and hop on another train to head South to the courthouse where he would blow a negative breathalyzer test in person for his bail officer.

Pretty soon, Tulvey’s boss said all the trips to see his bail officer were eating up too much of the workday, and he let him go.

Tulvey put his resume on Indeed, like usual, but he didn’t get any responses. He figured potential employers must be doing background checks. So, he stopped even applying for lots of the jobs he thought he’d be qualified for.

“Right now, I’m steering away from anything that I think might be iffy as far as, you know, having an assault on your record,” Tulvey said. “I mean, I’m not that person, but the word assault says it all.”

Eventually, Tulvey got a job with the recovery house where he lives — they knew about his past, but also trusted that he was a good guy.

That idea — that with a little context, employers will give someone a chance — is the foundation for Retrofit Careers. Doug Kiker, who has been sober for 13 years, is one if its founders. He always made an effort to hire people in recovery for his construction business, and he knew there were other employers out there like him. So he figured there should be a formal way to connect people in recovery with workplaces that will understand their situation.

It may seem like a tough sell to ask employers to pay to post jobs that draw from a pool of applicants in recovery. So far, Retrofit has just a handful of employers advertising for jobs. But more and more, job places are actually looking for people with a history of addiction. While private job boards are less common, some states are aggregating “recovery friendly workplace” lists.

Delta lighting runs a bustling call center just north of Philadelphia. Its 50 or so sales reps sell lighting and cleaning supplies to companies across the country. Joe Arndt is Vice President there. He’s been recruiting workers with a history of addiction for years and says he’s found they make great employees.

“They’re tremendously loyal to us, and they just work harder because they realize that they don’t necessarily have a lot of other options which is kind of sad,” he said.

When Arndt heard about Retrofit, he called to see how he could advertise for open positions at Delta.

“I’m not gonna sit here and say like we’re saints and we really want to help the community, which we do, but at the same time, we see it is an opportunity to get more employees like the ones we had gotten,” he admitted.

Arndt says he knows there are risks involved with hiring people in recovery – commission jobs aren’t for everyone, and the potential for relapse is real.

But, he says, a lot of those are risks you’d come up against with anyone. At least this way it’s out in the open.