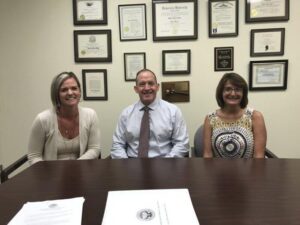 Confronting addiction humanely: Vigo County Juvenile Drug Court probation officer Jenny Fouts, Juvenile Magistrate Dan Kelly and chief juvenile probation officer Deb Kesler have a temporary certification to run their juvenile drug court and will apply for a permanent on at the end of the year, making it only the third juvenile drug court in Indiana. They focus on having a problem-solving court instead of an adversarial atmosphere. Photo Credit: Tribune-Star/David Kronke

Vigo County’s Juvenile Drug Court sprung to life on June 21st with its first court date. It differs from the traditional courtroom’s adversarial model in that everyone’s on the same side, seeking to solve a problem rather than exact punishment.

“The one thing that’s kind of unique about problem-solving courts like ours is that this is really a team approach,” said Juvenile Magistrate Daniel Kelly. In addition to the usual court staff, representatives from the school corporation and social services counselors meet twice a month and discuss how youths are faring in the program and how to respond, either with incentives or sanctions.

“It’s nice having this team approach, because you have a lot of people who have different strengths that they bring,” Kelly continued. “Having all these people in a team approach is really helpful.”

According to juvenile probation officer Jenny Fouts, another improvement is, “We are rehabilitating them in the community. We were spending on average for one kid to go to residential placement for substance abuse something like $60,000 if they complete a perfect program

“It took them completely out of their home, away from their family. We wanted to focus on treating them in the community that they’re going to return to — it’s more realistic for them.”

“They’re young — they’re making choices that they have no idea how it’s going to affect their entire lives,” she said. “Their drug usage affects them at school and at home, or being able to get employed. We want them to be productive citizens and have a good job so they can support themselves. We want them to be successful.”

Incentives for substance abusers who succeed in treatment range from remaining in the community to having charges against them dismissed or lowered.

Other incentives, added chief juvenile probation officer Deb Kesler, can be candy or just “simple verbal praise — to have the magistrate tell them, ‘You’re doing a great job,’ and all of the adults in the room when this happens.” She added that after just two months, they’re seeing improvements.

Kelly has a wish list for further incentives. “If businesses would like to donate gift cards, incentives is something we’re tying to get more of.”

Fouts added, “Our community needs to get a whole lot more invested in our youth. A lot of people say they want to be, but we do feel like we’re in the dark a lot down here. We’re trying to do great things with these kids and make changes and make things better.”

Kesler, Fouts and three other probation officers began hammering out the details for a Juvenile Drug Court in the fall of 2019; like many things, plans got derailed the following year by COVID-19.

“We told Dan this is what we’re looking at and he gave us the go-ahead,” Kesler said. “There’s a lot of legwork and mental preparedness.”

“They knew all along that I would be involved,” Kelly said. “I take the lead in the courtroom.”

Fouts said getting kids the help they need now could prevent worse problems for them in the future.

“We’re not seeing the severity that they’re seeing in adult drug court, but we are the beginning, and if we don’t work on it now, that’s usually where they’re gonna end up,” she said. “Some of these kids come from a long line of people with substance abuse issues, and that’s all they know.”

It’s important that the kids receive encouragement from as many people as possible, she added.