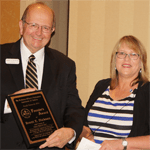 POPAI is honored to announce the 2014 Founder’s Award was presented to Justice Brent E. Dickson of the Indiana Supreme Court.

The POPAI Founder’s Award recognizes individuals who have significantly contributed to the field of probation in general and specifically to the POPAI organization and who are characterized by their commitment of influence and promotion of professionalism to Indiana probation.  Without question, Justice Dickson’s leadership has been an asset to the judiciary in Indiana.  He has also been a champion advocating for increased state-level resources for probation.  He has proven to be a fierce supporter of evidence-based practices in probation.

Justice Dickson was appointed to the Indiana Supreme Court in January 1986.  He became Chief Justice of Indiana on May 15, 2012 when former Chief Justice Randall Shepard retired.

Justice Dickson has proven to be an effective leader.  He has demonstrated a longstanding interest in fostering civility.  In his remarks during his swearing-in as Chief Justice, he stated, “We are determined to ‘wage civility’ at every opportunity—in the collegiality of our own deliberations, in the mutual respect expressed in our majority and dissenting opinions, and in our outreach to enhance civility in lawyers and trial judges.  In our administrative responsibilities, we are committed to continuing, with renewed energy, the Court’s best practices and openness to creative innovations, with fiscal responsibility.”

He served on the Indiana Criminal Code Evaluation Commission where he fully supported the focus on evidence-based practices that, as he stated “can make our criminal justice system more effective in protecting public safety, reducing repeat criminal activity, enabling offender reformation, and at the same time substantially reducing incarceration costs.”  He supported the resulting legislation, House Bill 1006.

During Justice Dickson’s’ first State of the Judiciary Address in 2013, he cited numerous ways in which he and the Indiana Supreme Court justices supported initiatives that improved probation in Indiana.  They supported deployment of the Odyssey Supervision (probation case management) System in counties that had requested the system and expressed the intent of the Supreme Court “to do everything we can to bring our Odyssey system as soon as possible to every county that wants it.”  He also noted the support of the Indiana Supreme Court for the new Juvenile Detention Alternatives Initiative, a reform effort that strengthens the juvenile justice system by focusing on a variety of ways to reduce reliance on detention.“

Justice Dickson has been a strong supporter of evidence-based correctional practices.  He has been an advocate of the development of the Indiana Risk Assessment System and Indiana Youth Assessment System.  Justice Dickson was instrumental in including probation officers on the special task force that assisted the Supreme Court to adopt procedures to successfully implement the adult and juvenile risk assessment systems across the state.  He has also appointed probation officers on other important committees such as the committee that is working to implement a state system to utilize sanctions and reinforcers/incentives and the committee that is working to develop case plans in INcite.

In his final year as Chief Justice, he again sought to increase resources for probation in Indiana by requesting funds to pay the salaries for all county Chief Probation Officers.  This would be a first step toward increasing state support for Indiana probation.

Congratulations to Justice Dickson for receiving the 2014 Founder’s Award.