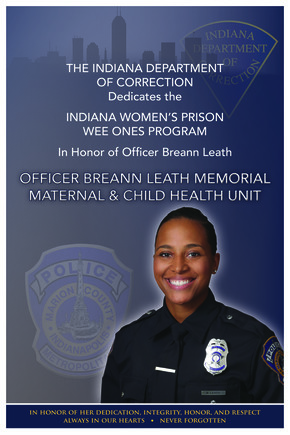 The announcement was made by Gov. Eric Holcomb at the beginning of his daily coronavirus pandemic press briefing at 2:30 this afternoon in his Statehouse office. Prior to inviting Dept. of Correction Commissioner Rob Carter to speak, Governor Holcomb spoke to Ofc. Leath being an incredible human being, who also had a profound impact on everyone she came in contact with. Gov. Holcomb also spoke about her influence on fellow coworkers as well as offenders during her service as a correctional officer at the Indiana Women’s Prison. Commissioner Carter then spoke to Breann’s commitment to the babies born at the women’s prison and how she helped care for them as though they were her own. Then Comm. Carter and the IDOC Chief Medical Officer, Dr. Kristen Dauss made the name change official with the presentation of a memorial poster with Breann’s picture proclaiming the new name of the child health unit. Most fitting about today’s announcement was that today, April 16, 2020 was the 12th anniversary of the unit’s opening; a fitting tribute to the memory of Officer Breann Leath.

Later in the afternoon several of Breann’s former co-workers from the IDOC visited her patrol car and participated in the community balloon release to commemorate Breann’s life and commitment to public service. Among those to attend was a current IDOC employee, Maggie Bryant, who serves as the Indiana Women’s Prison Pubic Information Officer. Ms. Bryant commented, “Officer Leath was a true example of an officer dedicated not only to safety and security of the prison infant unit, but also exemplified the goal to help incarcerated women become good mothers before leaving prison by making the IDOC mission her mission.” Ms. Bryant concluded, “All of us who knew Breann were heartbroken over her senseless death and want her family and IMPD coworkers to know Breann will not be forgotten.”

The Child Health Unit is a unique experience which has the goal of building strong families by allowing eligible incarcerated and pregnant mothers to keep their infants with them until their release. The nursery welcomed its first infant into the program on April 16, 2008 with the sole mission of maintaining the bond between mother and child. Since then, the program has admitted over 300 pregnant offenders to the program and welcomed over 200 infants into the world. The child health unit encourages the preservation of family by providing incarcerated mothers and their children a meaningful transition into the community. The unit utilizes a holistic approach for the continuum of care by recognizing the mother’s strengths and barriers to social determinants of health.