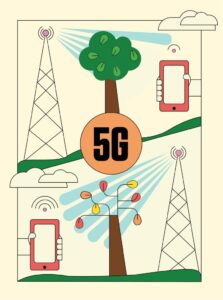 Measurements of trees’ impact on 5G transmissions could prove vital to using a new class of signal.

As 5G technology gets fully implemented over the next several years, cellphones and other wireless tech will grow more powerful with increased data flow and lower latency. But along with these benefits comes a question: Will your next-generation cellphone be unable to see the forest for the trees?

That’s one way to describe the problem confronting cell network designers, who have to embrace both the benefits and shortcomings of a new class of signals that 5G will use: millimeter waves. Not only can these waves carry more information than conventional transmissions do, but they also usefully occupy a portion of the broadcast spectrum that communication technologies seldom use — a major concern in an age when broadcasters vie for portions of spectrum like prospectors staking out territory.

However, millimeter waves also have drawbacks, including their limited ability to penetrate obstacles. These obstacles include buildings, but also the trees that dot the landscape. Until recently little was known about how trees affected millimeter wave propagation. And just as few of us would want to imagine a landscape without greenery, few designers would be able to plan networks around it without such a crucial fundamental detail.