Opioid abuse in the U.S. is a crisis, so much so that President Trump declared the epidemic to be a public health emergency under federal law in October 2017 and signed bipartisan legislation to address the issue in October 2018.

Dr. Raeford Brown, a pediatric anesthesia specialist at the UK Kentucky Children’s Hospital and chair of the Food and Drug Administration (FDA) Advisory Committee on Analgesics and Anesthetics, attributes much of the problem to Big Pharma and shoddy regulation by the FDA itself.

“One thing is clear and that is that the motive of the pharmaceutical industry is to make a profit,” Dr. Brown told Yahoo Finance. “And one would hope that in having that profit noted that there would be due consideration to what is ethical and what is moral.” He added that pharmaceutical companies “put pressure on [doctors] to prescribe opioids for reasons that aren’t indicated and because of that, patients get hurt.”

At the same time, according to Brown, the FDA hasn’t “been doing enough to oversee Big Pharma, and I don’t think that they have for a long time.” 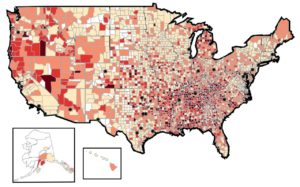 ‘Pharmaceutical companies reassured the medical community‘
Although awareness of the opioid crisis has only been gaining traction in recent years, Brown said that the perverse incentive structure behind the epidemic is something that many have been concerned about since the mid-90s.

David Herzberg, associate professor of history at State University of New York at Buffalo, previously described the increasing power of the pharmaceutical industry, which had “kept coming up to the door, knocking on it, and being turned away” until the 1990s.

In 1995, a tipping point of sorts occurred when the FDA approved Oxycodone. To ease worries, “pharmaceutical companies reassured the medical community that patients would not become addicted to prescription opioid pain relievers, and health care providers began to prescribe them at greater rates,” according to the National Institute on Drug Abuse.

“The pharma industry was aware that the [pain management reform] movement existed and put enormous money behind the people pushing for it,” Herzberg told Yahoo Finance. “What you had was an FDA that was told to get out of the way of the industry.”

Between 21-29% of patients who are prescribed opioids for chronic pain misuse them, and between 8-12% develop an opioid use disorder, according to U.S. government data.

FDA ‘problematic in their regulation of opioids’
Brown has served as the chair of the FDA Advisory Committee on Anesthetic and Analgesic Drug Products since July 2016. During that time, he said, he’s had many interactions with the principals at the FDA.

“I have told them repeatedly that there were issues that were problematic in their regulation of opioids, and that there was a requirement for substantial change,” Brown said. “What I got from that is they’re not interested at this point in what I had to say.”

In 2018 the FDA wanted to approve a drug called Dsuvia, a formulation of sufentanil that Brown describes as a “very potent” opioid compound that is “500 times more potent than morphine.” The agency seemed to know he would push back.

“They waited until a time when I was going to be [away] and they had the meeting without me,” Brown said. “It seemed to be calculated to gain approval of the drug by having people involved in the advisory committee system that had not been there in a while, and certainly that I wasn’t there.”

After the FDA approved the drug, Brown “made a conscious effort that day forward that I was going to make it my business to help the public understand better what the problems that I saw with the approval process for opioids were.”

The FDA declined to respond to Brown’s comments. However, in a statement to Yahoo Finance, the FDA said that it “has acknowledged it is among those that should have collectively acted sooner to slow the growth of this tragic epidemic or limit its scope but continues to work aggressively to address this crisis. …

“From clinical testing and drug review to postmarket enforcement and surveillance, the FDA remains the nation’s key consumer watchdog for the pharmaceutical industry.”

The lawsuit alleges that the company deceived Massachusetts doctors and patients so that more people would use its drugs, that it misled these people to use higher and more dangerous doses, and that it deceived them so they would stay on these drugs for longer periods of time.

“All the while, Purdue peddled falsehoods to keep patients away from safer alternatives,” Massachusetts argued. “Even when Purdue knew people in Massachusetts were addicted and dying, Purdue treated doctors and their patients as targets to sell more drugs. At the top of Purdue, a small group of executives led the deception and pocketed millions of dollars.”

Brown said that doctors “have been encouraged to be very liberal about their prescribing and for a long time, the pharmaceutical industry was very helpful and having time to educate doctors to liberalize their use. That’s where we’ve gotten ourselves into trouble.”

‘It’s ludicrous for us not to do everything’
The government estimates that 130 people die each day from opioid overdoses in the U.S. The National Institute on Drug Abuse, citing data from the CDC, “estimates that the total ‘economic burden’ of prescription opioid misuse alone in the United States is $78.5 billion a year, including the costs of health care, lost productivity, addiction treatment, and criminal justice oversight.”

The scale of the problem drives Brown, even while he sits on the FDA’s advisory board, to be outspoken about the FDA’s lax oversight of opioids.

“People are continuing to drop dead on the streets,” he said, “and it’s ludicrous for us not to do everything that we possibly can to make certain that we’re dealing with opioids in the safest way possible.”