During the 2016 presidential race, Governor Mike Pence said: “We need to adopt criminal justice reform nationally. I signed criminal justice reform in the state of Indiana, and we are very proud of it.” He was referring to House Bill 1006, which he signed on May 5, 2015 after it passed the state House and Senate without a single opposing vote. The bill was, among other things, designed to reduce the number of people in prison by housing people convicted of low-level felonies in county jails. It was lauded by many as part of a trend towards bipartisan prison reform. Any positive effect, however, was short-lived. Indiana’s prison population decreased and then quickly rebounded to pre-reform levels. Now, the total number of people behind bars in Indiana is exploding as more and more are sent to jail, and as people in prison serve longer sentences. To ease the jail overcrowding precipitated by the bill, many counties are expanding their jails or constructing new ones, the costs of which are borne by taxpayers in Indiana. At the same time, the most vulnerable residents languish in county jails, sometimes far from home, and face a landscape marked by poverty and high overdose rates upon release.

Much of HB1006 was catalyzed by a justice reform effort initiated in 2010, under then-Governor Mitch Daniels, to address rising prison incarceration and increased corrections spending in the state.* Once implemented, however, the bill worked to drastically increase incarceration in Indiana; in the two years following reform, the county jail population rose 32 percent from 16,100 to 21,300.

The recent jail growth in Indiana is reminiscent of the decades when mass incarceration was being built up across the country. In many states, from the early 1980s until the early 2000s, a 32 percent increase in jail population over two years was not uncommon. But around the mid-2000s, growth in the U.S. incarceration rate began to slow. Declines, rather than rapid growth, became the norm. As more and more people understand the link between rising inequality and imprisonment, between racism and incarceration, there has been growing momentum to undo the build-up of jails and prisons of the last forty years.

In Indiana, however, prison reforms have accomplished the reverse: trumpeted as both compassionate and common sense, reforms have increased overall correctional control—including jail, prison, probation, and parole—by 11 percent in three years. The one percent decline in prison population that the bill achieved has been overwhelmed by an ever-increasing number of people held in county jails and on probation and parole. No other state has added so many to its jail population so rapidly since Nevada in 2003. As a recent Vera report stated: “contemporary decarceration exists alongside continuous growth, stagnation, and jurisdictional shifts between prisons and jails, akin to a shell game.” Even while other states have shifted prisoners from the state to the county level, the case of Indiana stands out. Over the past five years, as Pence’s reforms were implemented, incarceration rates in Indiana have risen to all-time highs. 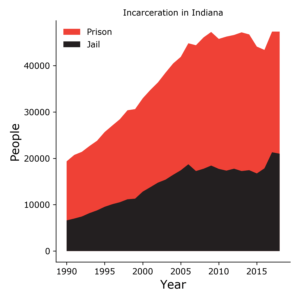 How did reform efforts have such devastating consequences for jail growth and overcrowding in Indiana? The bill that then-Governor Pence signed in 2015 had a several-year history. In 2013, the state passed the original version of HB1006 which made sweeping changes to the penal code—creating new felony classes and harsher penalties for the most serious offenses. Changes made in 2014 lightened the severity of some sentences, while further increasing the amount of time that had to be served before release for more serious convictions—a callback to 1990s-era “truth in sentencing” laws. The final round of changes to this law in 2015 reclassified the lowest level felony sentences—carrying a maximum of two and a half years—to be served in county jails instead of state prisons. These crimes, called “Level 6” felonies, cover a wide range of offenses including drug possession, assault, arson, minor sex crimes, and issuing bad checks. The impetus for this shift to jail, as stated by the bill’s authors, was to decrease recidivism by keeping families together by allowing people to serve their sentences closer to home.

Nearly all of Indiana’s jails are now at or above capacity. In aggregate, all but two percent of the state’s jail beds are filled, and jails in 64 of Indiana’s 92 counties are overcrowded. At the extreme end, the Greene County Jail in rural southern Indiana has a capacity of 84 people, but held 173 people on June 28 of this year. Across the state, county governments are building new and larger jails in order to keep up with the changes to Indiana’s criminal justice system. HB1006 simultaneously passed the costs of incarceration onto counties, while lengthening prison sentences for people in the state system who were convicted of violent crimes. Over the two years following its passage, the number of people sent to prison plummeted, while the number of people held in jail increased sharply. And at the state level, the multiple iterations of HB1006 that lengthened sentences for serious violent felonies ensured that Indiana’s prison population would rise again after the initial drop. 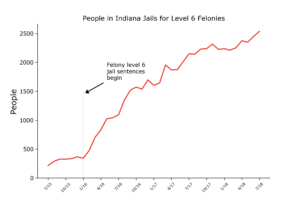 Counties in Indiana are not allowed to raise income or property taxes without approval of the state legislature. This, combined with growing jail numbers resulting from HB1006, has burdened Indiana counties with extra incarceration costs without the means to pay for them. County jails must cut budgets for food, medical care, and what little programming might be available to the people incarcerated there, creating harsher conditions which people now endure for longer. Prison reform in Indiana has meant devolving costs of incarceration onto counties, towards a more stripped-down and locally based system of mass incarceration.

State oversight of county jails in Indiana has contributed to jail expansion. The Indiana Department of Correction has oversight authority to ensure all jails in the state comply with jail standards set by the legislature, and jails deemed out of compliance incur risks of legal liability. In practice, this means that the Indiana Department of Correction encourages counties to build bigger jails. Currently, 70 percent of Indiana’s jails would be considered out of compliance due solely to overcrowding, providing the justification for some sheriffs to argue for jail construction projects. In the past two years, the state legislature has approved laws for several counties allowing them to raise income taxes to pay for jail expansion; this, in a state where rural counties are struggling with poverty, drug addiction, and rising HIV rates resulting from cuts to health care and social services.

As we know from decades of experience of jail and prison construction across the county, investment in larger jails leads to higher incarceration rates. If you build it, they will fill it. Right now, Indiana sheriffs are trying to find ways to keep people out of jail, often because their jails are at or above capacity. New empty beds in a big new jail remove the motivation to divert people and will end with more people locked up. The jail construction projects that are currently underway or have been announced will add 2,149 new jail beds in the state, an increase of more than 10 percent over current capacity.

Criminal justice reforms in Indiana cannot be separated from the long history of legal and extralegal violence against people of color in the state—a legacy that is visible in racial disparities in incarceration at the county level. The Indiana Constitution of 1851 explicitly banned black people from settling in the state, and in 1925, over half of the General Assembly, as well as the governor, were members of the Ku Klux Klan. In Elkhart County, one of many Indiana counties whose towns had ‘sundown’ ordinances and practices on the books well into the late 20th century, the black jail incarceration rate was more than five times the rate of the white incarceration rate: Black incarceration was 244 per 10,000 people between the ages of 16 and 64 in 2015, while white incarceration was 43 per 10,000. Black people in Elkhart County, 6.4 percent of the population, make up 34 percent of the population of the county jail. In Kosciusko County, to the south of Elkhart, the black incarceration rate was 342 per 10,000 in 2015. The thrust of the conservative case for reform is that prisons and jails, like government in general, have become too expansive and expensive. In the words of Newt Gingrich, Indiana ought to reserve prison for those we are “scared of” and not those we are merely “mad at.” In Indiana, conservative reforms have not reduced the number of people in custody. Instead, people have been moved from prison to jail—a carceral shell game leading to jail expansion in a state with a long history of racism and racial disparities in arrests and incarceration.

The massive growth in Indiana’s jail population has come at the same time as a 47 percent increase in drug overdose deaths in the state—a tragedy that HB1006 has done little to address, and may even have exacerbated. Incarceration without treatment increases the risk of overdose after release, and jails have little to no drug treatment, unlike the state prisons. Substance use, however, is best treated in the community, not behind bars. Over the last two years, Indiana has had a higher overdose rate than any neighboring state. According to the Indiana State Department of Health, the Monroe County Jail is the only jail in the state permitted to distribute naloxone, a potentially life-saving medication that is used to stop overdoses. When signing HB1006, Governor Pence said, “Indiana should be the worst place in the nation to commit a crime and the best place to get a second chance once you’ve done your time.” Abandoning people with substance use disorders by locking them up with no treatment before release means that, for many people, the “second chance” leads to overdose.

Criminal justice reform must be evaluated by its impact on people, their lives and communities. Some reforms can decrease the use of incarceration in the face of social and economic problems. Indiana’s recent criminal justice reforms, on the other hand, have led to an increase in jail and prison capacity at the local level, heightening the economic costs and personal toll of mass incarceration. The state, at the crossroads of America, now faces a question that communities across the country must grapple with in order to end mass incarceration: What comes next?