There are real concerns with marijuana addiction. That doesn’t mean legalization is a bad idea.

It is now widely accepted that marijuana is, at the very least, less dangerous than other recreational drugs. The typical line you’ll hear — I certainly do in my email inbox — is that “marijuana is harmless,” often meant as a justification for legalizing cannabis.

But at the Atlantic, Annie Lowrey provides a corrective to this narrative, diving into the real risks of marijuana addiction. The whole thing is worth reading, but here’s the key paragraph:

For Keith Humphreys, a professor of psychiatry and behavioral sciences at Stanford University, the most compelling evidence of the deleterious effects comes from users themselves. “In large national surveys, about one in 10 people who smoke it say they have a lot of problems. They say things like, ‘I have trouble quitting. I think a lot about quitting and I can’t do it. I smoked more than I intended to. I neglect responsibilities.’ There are plenty of people who have problems with it, in terms of things like concentration, short-term memory, and motivation,” he said. “People will say, ‘Oh, that’s just you fuddy-duddy doctors.’ Actually, no. It’s millions of people who use the drug who say that it causes problems.”

People say marijuana is harmless, largely based on their own experiences with the drug. When it comes to countering that narrative, it’s one thing for doctors or Drug Enforcement Administration (DEA) agents to claim that pot really is harmful — that can be easy to ignore. But when marijuana users themselves claim to have problems, maybe that’s worth listening to and taking seriously.

These are real people with real problems. Lowrey follows the story of Evan, whose personal life and law career slipped as he found himself compulsively using marijuana, letting it take over his life.

As Jon Caulkins, a drug policy expert at Carnegie Mellon University, has told me, “At some level, we know that spending more than half of your waking hours intoxicated for years and years on end is not increasing the likelihood that you’ll win a Pulitzer Prize or discover the cure for cancer.”

That doesn’t mean marijuana is anywhere as dangerous as cocaine, heroin, alcohol, or smoked tobacco, all of which carry a real risk of death that pot doesn’t. But weed isn’t harmless.

It’s not clear if marijuana addiction is becoming more widespread as more states legalize pot, but the problem is certainly not getting better. Lowery, citing data from the National Epidemiologic Survey on Alcohol and Related Conditions (NESARC), reported that the “share of adults with [a cannabis use disorder] has doubled since the early aughts.”
But some researchers argue that NSDUH is more reliable for tracking trends and changes in drug use — since, unlike NESARC, it doesn’t go through major methodological changes between waves. And while NSDUH has found that use in general and daily or near-daily use are up, the prevalence of cannabis use disorder has remained roughly flat.

The existence and risks of marijuana addiction aren’t necessarily a knock on legalization. Other addictive and much more dangerous substances, like alcohol and smoked tobacco, are legal, after all. But as the country and world move forward with legalization, addiction is a risk that’s worth keeping in mind.

When evaluating whether to legalize, the question should not be whether marijuana is harmless, but whether pot’s harms and the harms of legalizing it outweigh the harms of prohibition. It’s a cost-benefit analysis.

On the cost side, will legalization, by increasing access and potentially use, lead to more overuse and addiction to marijuana? Will it lead to more car crashes, mental health issues, and respiratory problems (all of which are problems linked to pot in the scientific research)?

On the benefit side, will legalization lead to fewer arrests over a drug that is, after all, still not that bad compared to other drugs (given that it can’t cause overdose deaths)? Will the revenue drug cartels lose from illicit marijuana make them less powerful and less able to carry out violent acts around the world? Will legalization be a boon for people who could benefit from pot medically, given its potential use as a treatment for pain, muscle stiffness, and other issues? Will a regulated market be able to tame the risks of the drug better than prohibition has, particularly by keeping it away from children?

And how will all of these potential costs and benefits balance out — a net gain or net loss?

The jury is still out on a lot of these questions. Drug policy experts caution that more years of legalization and more research into the policy’s implementation are needed before a hard conclusion can be reached.
One early concern, though, is that the most common form of legalization that states are pursuing does not adequately minimize the risks of addiction.

Currently, most of the states that have legalized have adopted a model that lets for-profit companies produce, sell, and market the drug, similar to alcohol. But these companies have a perverse incentive — because the most lucrative customers, for them, are those who use (and buy) a lot of pot, even if it’s to feed an addiction.

Some early data from Colorado, one of the first two states to legalize, speaks to this point. A 2014 study of the state’s legal pot market, conducted by the Marijuana Policy Group for the state’s Department of Revenue, found the top 29.9 percent heaviest pot users in Colorado made up 87.1 percent of the demand for the drug.

Given these statistics, to whom is the marijuana industry likely to market its product? Will the industry care much about the risk of addiction if companies profit from it?

That’s why experts caution that tougher regulations are necessary. But as Humphreys told Lowrey, that’s not really happening with marijuana: “Here, what we’ve done is we’ve copied the alcohol industry fully formed, and then on steroids with very minimal regulation. The oversight boards of some states are the industry themselves. We’ve learned enough about capitalism to know that’s very dangerous.” (Excessive drinking is linked to 88,000 deaths a year, and tobacco smoking to 480,000 to 540,000 deaths a year.)

There are also other models, besides the commercialized approach, for legalization. The government could legalize possession and gifting but not sales, as Washington, DC, has done. It could put state agencies in charge of selling pot, as some provinces in Canada are doing — which research has linked to better public health outcomes for alcohol. A RAND report, in fact, noted that there are at least a dozen alternatives to standard prohibition. 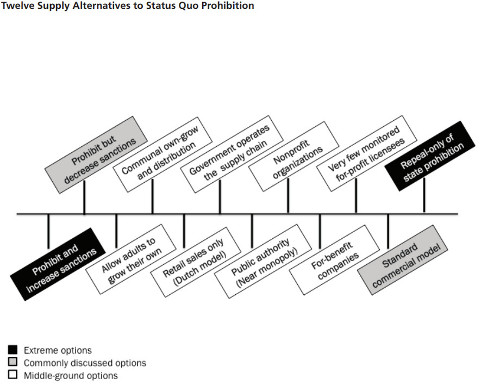 So far, though, only prohibition and the standard commercial model have gotten a lot of discussion. But if you take the risks of addiction seriously, the commercial model may not be the best idea even if you support legalization.