The Philadelphia Inquirer on 1/10/2020 by Samantha Melamed 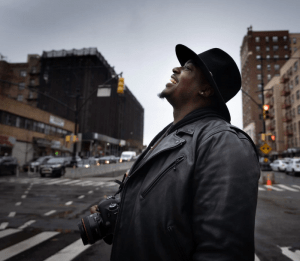 NEW YORK — By 8 a.m., the line already snaked all the way around the side of the South Bronx probation office, and more people were arriving, dragging metal shopping carts ready to receive canned vegetables, Thanksgiving turkeys, cat food, and boxed mac-and-cheese.

The eager, polyglot crowd, most of whom are not under court supervision, is the first indication that this is not probation as it is understood in many parts of the country — and definitely not in Philadelphia, where a probation visit typically means a brusque security screening followed by a brief encounter with a probation officer, all under the constant fear of incarceration.

This is the South Bronx NeON, short for Neighborhood Opportunity Network, one of seven neighborhood probation offices located in communities with high rates of supervision. In addition to drug testing and court-ordered reporting, the offices offer free photography classes and GED courses, sewing circles and antiviolence initiatives, food giveaways and a clothing closet, all open to those on probation as well as their neighbors. The South Bronx NeON has a poet-in-residence; other sites run music programs in collaboration with Carnegie Hall.

They present a new vision for what a probation office can mean to a neighborhood, probation commissioner Ana Bermudez said.

“The NeON is not a recidivism reduction strategy. It’s a community reinvestment strategy,” she said. “It’s a vehicle to create meaningful opportunities for people on probation. A byproduct of those interventions is a sense of safety in the community.”

It’s also the most visible emblem of a more fundamental shift: from an old-school, compliance-driven mentality to one focused on supporting people and reintegrating them into society.

It seems to be working: In New York City, around 80% of people on probation complete it successfully. In Philadelphia, just 49% do.

The shift began around 2010, when Bermudez’s predecessor, Vincent Schiraldi, was hired to run the city’s probation department. A reformer who had previously revamped juvenile corrections in Washington, D.C., Schiraldi is now a research scientist advocating for nationwide probation reform at Columbia University’s Justice Lab, where he advocates “shutting down juvie” and radically shrinking probation. As New York’s probation commissioner, he articulated a new philosophy that he boiled down to: “Do more good. Do no harm. Do it in the community.”

The first step was a makeover for the neighborhood probation offices’ bleak institutional waiting rooms, which were framed by thick Plexiglas barriers and tacked-up signs blaring rules and blunt warnings (an aerial photo of Rikers Island promised wrongdoers an “all-expenses-paid island vacation”). These spaces were overhauled into “cafés” with colorful murals, movable stages for performances, and tables and chairs that aren’t bolted to the floor.

That blossomed into a total overhaul of the offices, which previously had been seen as tentacles of a surveillance state through which probation agents collaborated with local police districts by conducting warrantless searches of probationers’ homes in nearby poor, minority neighborhoods.

“We’re trying to dispel some of the historical trauma that has been in place between probation, law enforcement, and the community,” assistant commissioner Tim Salyer said.

So, staff were instructed to call those on probation “clients,” rather than “offenders.” Community leaders were invited to help develop plans for the NeONs.

The transition was not always smooth. One point of friction was eliminating the Plexiglas and metal detectors.

“That was a fight with the probation officers, to relinquish that safety precaution they thought they needed,” said Brenda Davis, the South Bronx NeON branch chief. “But we found that when you treat people the way they should be treated, like human beings, they act accordingly.”

Still, Schiraldi said many officers, who had harbored aspirations of helping people, wanted alternatives to the endless cycle of probation violations and incarceration — what he called the “trail ‘em, nail ‘em, and jail ‘em bureaucracy.”

“They haven’t bought into mass incarceration, and yet here they are vehicles of it,” he said.

Today, each officer has an interviewing handbook, based in cognitive behavioral therapy, to help clients set goals, called Individual Achievement Plans. Officers also can make referrals to resources on site, such as clinical advisers who address behavioral health needs or “credible messengers,” who are mentors that come from the community and may have experience in the justice system.

A byproduct is violations fell by 45% over five years, to a rate at least four times lower than in Philadelphia.

In Pennsylvania, more than two-thirds of people who are found in violation of probation and resentenced have not committed a new crime. Instead, they’re punished for so-called technical violations like failing drug tests or missing appointments. In response to those infractions, it is not unusual for probation officers to call for sentences of incarceration.

“Our job is to get you through the system, not to send you back to jail,” said Annette Carchidi, the Bronx supervisor for Community Progression, which monitors those who have graduated to reporting at electronic kiosks. Violations may be necessary in cases where a client’s behavior poses a public-safety risk, she said, but they’re not filed lightly. “The judge wants to know: What has probation done to help this person? Where did we go wrong? In a sense, their threat level rose under my watch. I have to explain my due diligence.”

People on probation are responding. Before, more than 10% of Carchidi’s clients failed to report; now that rate is 2.2%.

One who is finding success is Andre Whitehead, 32, who speaks of probation with something like reverence.

It wasn’t like this his first time on probation, in 2013. He was already hungry for a different path, spurred by the memory of a close friend who was shot to death on the picnic table where they both sold drugs. But he couldn’t get much help, he said. “I remember talking to my probation officer and asking her to help me get a job. She said, ‘We don’t do that.’ ”

Two years ago, he wound up on probation again for a trespassing case, charged as burglary. This time, everything seemed different. This time, within a couple of weeks, his probation officer had referred him to a job fair. Not long after that, he enrolled in NeON Photography, a 12-week class in which students learn to handle cameras and go out on assignments — everything from probation department events to the Thanksgiving Day Parade to New York Fashion Week.

He recalled the joy he felt when, at the end of the class, he received a set of business cards.

“I’ve never been able to do that before, to give people my card and say: ‘This is what I do. This is my profession,’ ” he said.

He’s now an instructor in the photography program, contemplating going back to school, eventually starting his own business. If he can pay off his fines, he hopes for early termination of probation. For now, though, “It doesn’t feel like a punishment,” he said. “It feels like the opposite to me. The help and assistance they provide for us is remarkable. It motivates me.”

The system is, of course, not without flaws: Critics complain that efforts to build trust are marred by high staff turnover. The organizations that bring together credible messengers say they are never sure if their contracts with probation will be renewed from one year to the next, making it an unreliable employer. And evaluations of the NeON arts programs identified problems with recruiting and sustaining attendance among the targeted population.

Even so, the NeON model has caught the attention of probation and court officials from around the country — including Los Angeles, Chicago, and, yes, Philadelphia — who have toured the offices to learn more.

But Schiraldi said New York’s success was made possible by a drastic reduction in the probation population that began well before he arrived at the department, from a peak of 77,000 to fewer than 20,000.

So, even as the department’s budget shrank, they were able to spend more per capita (though still a fraction of the cost of incarceration). Today, caseloads range from 25-to-1 for high-risk clients to 60-to-1 for low-risk clients. About 70% of clients have graduated to checking in at the kiosks instead of reporting to an officer.

In Philadelphia, the average caseload is 114 probationers. 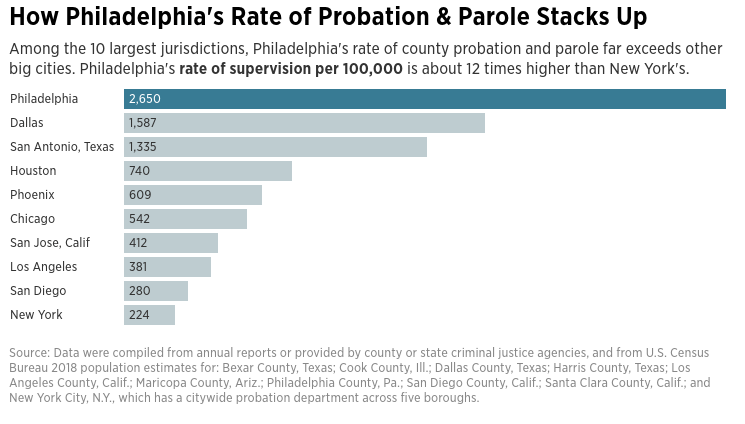 Schiraldi believes any effort to rethink probation culture and practices in Philadelphia — where the rate of community supervision is 12 times higher than New York’s — must be paired with legislative or judicial action to rein in that sprawling system and create manageable caseloads.

“Is Philadelphia 12 times safer than New York?” he said. “Or really, are you engaging in a fiction that may make a judge or a legislator feel better, but in reality deprives people of their liberty, while really missing the ability to focus your limited resources on the people who need supervision and need help?”