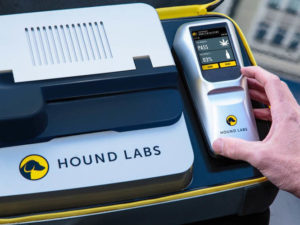 As legalization of recreational and medical marijuana continues to expand, police across the country are more concerned than ever about stoned drivers taking to the nation’s roads and freeways, endangering lives.

With few accurate roadside tools to detect pot impairment, police today have to rely largely on field sobriety tests developed to fight drunk driving or old-fashioned observation, which can be foiled with Visine or breath mints.

Now one California company claims it has made a major breakthrough in creating what some thought of as a unicorn: a marijuana breathalyzer.

“We are trying to make the establishment of impairment around marijuana rational and to balance fairness and safety,” says Hound Labs CEO Mike Lynn in his downtown Oakland, Calif., office.