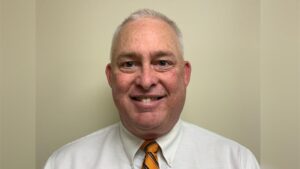 Lawrenceburg, Ind. – Steve Bradley is being recognized for his many years of contribution to the Lawrenceburg High School boys basketball program.

Bradley has had a major impact on the Tigers program, serving as and assistant and the freshman boys coach for 26 seasons.

““Steve’s greatest quality is that he always finds a way for every player to help the team,” said Cutter. “Steve is great at coaching each player individually and focusing on how to make it a positive experience for them. His positive approach and love for coaching our student-athletes is contagious. He is great at finding the good things from a defeat and the good things from a player who may not be able to contribute as much as another.”

Before Bradley got his start in coaching, he was an athlete himself. A 1983 graduate of Lawrenceburg, Bradley earned two letters in basketball, two letters in football, four letters in golf and one letter in baseball.

He went on to play quarterback at Davidson College, where he ranks 10th in school history for completions.

His competitive nature is something his players feel when in his presence.

“Coach Bradley has impacted multiple generations of student-athletes in our community,” said Aaron Cornett, former Lawrenceburg athlete and now a parent of current Lawrenceburg athletes. “As a 16-year-old, I noticed the intensity and competitiveness that he brought to our practices. It was easy to see how he cared for the team by pushing each player to become better through hard work and positive reinforcement.”

Aside from coaching, Bradley has spent the last 30 years working as a probation officer in Dearborn County.