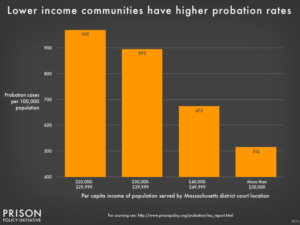 The Governor of Massachusetts, Charlie Baker, has introduced a new progressive proposal to end the monthly probation and parole fees in his recent budget plan. The Massachusetts Trial Court and the Boston Bar Association working groups recommended in 2016 and 2017 that the state do away with fees, advocating instead that “parole and probation officers should be allowed to focus on helping those under their supervision succeed, not on collecting money from them.”

These fees currently equate to about $80/month for people on parole and between $50-$65 for people on probation. In addition to creating “an undue financial burden on those reentering society,” these fees disproportionately affect people of color. As confirmed by the just ended MA special legislative commission on structural racism in parole – in which EXiT members Ed Dolan and Andy Peck participated–supervision fees do not reduce recidivism nor improve public safety.

Baker has already enacted other progressive supervision reform policies, such as waiving fees for the first year of parole and the first six months of probation in a 2018 bill. This policy would go a step further to ensure reentry as a road to success by removing financial burdens to allow for greater access to stable housing, employment security, and equitable outcomes. In addition to Massachusetts, other states such as California and New York are also re-evaluating supervision fees. These efforts signal to other states how they might also eliminate and or reduce fees for people under supervision as a means to reduce recidivism and encourage more hopeful outcomes for people reentering society post-incarceration.