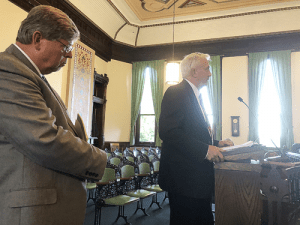 The Kosciusko County Probation Department will get a new officer in 2020 after Judge David Cates further explained Thursday to the county council how Criminal Rule 26 will affect the county.

During a budget hearing Monday, he asked the council to reconsider their decision to not approve any additional probation officers for 2020 because of a state mandate. The wage committee made a nonbinding recommendation to the council on new employees and wages, which also didn’t include any new probation officers.

According to information online at www.in.gov, Rule 26 states, in part, that “if an arrestee does not present a substantial risk of flight or danger to themselves or others, the court should release the arrestee without money bail or surety subject to such restrictions and conditions as determined by the court except when: (1) The arrestee is charged with murder or treason. (2) The arrestee is on pre-trial release not related to the incident that is the basis for the present arrest. (3) The arrestee is on probation, parole or other community supervision.”

He said the concept is pre-trial release.

“We have competing constitutional perspectives here. One is that a criminal defendant, a person accused of a crime, is innocent until proven guilty. Second is, people are entitled to bail for most crimes – not talking murder or treason – but for most crimes. We also have to keep the community safe. So we have competing interests here,” Cates explained.

The IRASPAT is a list of questions to be asked, to gauge the likelihood of an arrestee’s failure to appear and danger to the community.

“From that verified score, there is a matrix and the matrix is largely something determined by local judges,” Cates said. He there is a team going to Indianapolis Oct. 4 consisting of law enforcement, prosecutor, judicial and probation staff to make sure that matrix is properly developed so “we can proceed. When you look at that matrix, you look at that crime and that determines the level of pre-trial release. It may be (own recognizance), it may be cash bond, it may be some sort of monitoring.”

“With Criminal Rule 26, they’re going to have to administer the test,” he said.

Nine counties have already piloted the process. Of those, Cates said, one uses jailers who have been specifically trained to administer the test, which he said came with some inherent conflict; and one county created an entirely new office of pre-trial services, which he didn’t advocate for.

“Which leaves us with our probation department. They’re the folks that are trained to do it, they can do it,” he said, but he wants them to monitor offenders as much as possible which is why more probation officers are needed to administer the test for the pre-trial release.

If offenders are assessed correctly, and pre-trial defendants can be released and monitored, the system could free up a conservative estimate of 50 beds at the jail, Cates said.

He said the county’s options were to do nothing and live with what it has, but the probation officers will be required to administer the IRASPAT and that will take away their time from monitoring offenders; the county could create a new office, which he repeated he was not suggesting; it could hire and train additional Community Corrections officers, which will take time;  or it could add additional adult probation officers, which was Cates’ recommendation.

Cates said Rule 26 is something that was being imposed upon the county and will involve some additional services for pre-trial.

Councilman Mike Long asked if it was still a pilot program or come Jan. 1 if became a full-time program. Cates responded it was a pilot program now, but on Jan. 1 it becomes effective in all 92 Indiana counties.

Long asked how Rule 26 would affect the revenue to the county.

He said most of the people arrested in Kosciusko County are on misdemeanors. Most misdemeanors, if not all, will be, at least initially, an automatic “out on their own recognizance” with no bond whatsoever.

After the council approved the new probation officer, Council President Sue Ann Mitchell said that as far as full-time new county employees for 2020, it was up to 12. Of that dozen, all but one were for the departments in the Justice Building.

“Does that tell you where our expenditures are? Does that tell you that we spend an awful lot of money on trying to take care of those who are doing bad things? It’s kind of an eye-opening thought when you think about it like that,” Mitchell said. “So because of those people that do bad things, that causes us to have to spend more money across the street (at the Justice Building), we’ll have to be looking at taking  the money from the (Economic Development Income Tax) and moving it from EDIT back into the general fund.”

The council approved moving $2 million from EDIT to the general fund for budgets and other increases.

The council also approved a new investigator for the prosecutor’s office as longtime investigator Sam Whitaker is retiring at the end of the year. Starting pay will be about $48,000. With the new investigator, County Prosecutor Dan Hampton will have two investigators in his office.