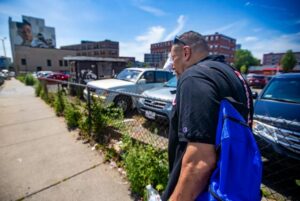 Heroin started rewiring and taking control of Will’s brain in the early 2000s, as he turned 40.

“Back then, if you used drugs people didn’t want anything to do with you,” Will recalls. “People gave up on me.”

Will lost almost everything: jobs, his driver’s license, his car, his marriage and his home. He found enough temporary work to pay rent on a room, ate at soup kitchens, and stole and resold goods for cash.

We’re only using Will’s first name because future landlords or employers might not take him based on his record.

One morning almost three years ago, with no heroin and no money to buy any, Will went into withdrawal. This former basketball player, once in top shape, dragged himself down the street searching for a deal. He had some crack that he could sell. The buyer was an undercover cop.

“That was the game changer,” Will says.

Instead of prison, Will was sent to a daily probation program in Massachusetts called Community Corrections.