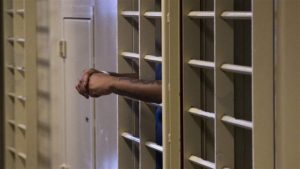 Jailing mentally ill people costs more and increases the likelihood they will be back. States and localities increasingly are working to get them treatment instead.
© The Associated Press

A dearth of beds at state psychiatric hospitals in many parts of the country and shortages of mental health resources mean that mentally ill people who commit minor crimes often end up languishing in jails, which are poorly equipped to handle their illnesses.

It’s a difficult problem that, without intervention, creates a grim cyclical pattern: Untreated mentally ill people get carted off to jail, where their illnesses go unaddressed, which increases the odds that they will commit crimes after their release.

But cities, counties and states across the U.S. are attempting to break that pattern, using law enforcement and criminal justice tools to direct those with mental illness toward treatment services that could help them control behaviors that got them into trouble.

The interventions come in many forms. There are now more than 300 mental health courts, in which defendants deemed mentally ill are directed to mental health treatment services rather than incarceration. Some jurisdictions, such as Maryland, allow for mental health competency exams to occur in community settings, so that defendants don’t have long waits for space at state hospitals, where the exams usually take place. And in Florida, Miami-Dade County gives some mentally ill defendants suspected of misdemeanors or nonviolent felonies the option of treatment rather than jail or prison time.

More jurisdictions are turning to what are known as crisis intervention teams — police officers who are trained to de-escalate situations involving people who show signs of mental illness and take them directly to mental health treatment centers rather than jail.

The results have been encouraging, with fewer arrests and fewer repeat offenders. The Miami-Dade County program, for example, cut nearly in half the chances that a mentally ill defendant would return to jail in the year after discharge compared to mentally ill defendants who were not in the program.