Editor’s note: Bloomington is not immune to the scourge of heroin and opioid addiction crippling the country. The epidemic has claimed the lives of 41 people in 2015 and 2016 in Monroe County. Two brave Bloomington residents have shared intimate details about the darkness of addiction and the hard work of sobriety with the hope that honesty will help those in struggle. 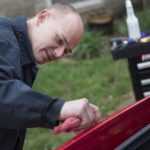 Kevin Carter once saved a man’s life. He winces telling the story.
The man had overdosed on heroin at Carter’s apartment on the south side of Bloomington. Fearing arrest, folks scattered. Several people, there to buy and do drugs, ran out the back door.

Carter carried the unconscious man outside and placed the limp body next to a dumpster.

He started rescue breathing right there by the trash, trying to keep the man alive. Others called 911: no one had any naloxone, the magic opioid overdose antidote.

Carter had been making two trips a day to Indianapolis or Mooresville to purchase half-ounces of methamphetamine and heroin. The drugs already were spoken for by his customers before returning to Bloomington. That night, Carter had enough drugs in his apartment to catch what he called “big boy felonies.”

Once he heard approaching emergency sirens, Carter told the others to stay with the overdosed guy. He retreated inside, turned off all the lights and hid beneath his bed covers. If the police came knocking, he’d claim to have been asleep.

Police officers and medics arrived, revived the man with naloxone, whisked him away in an ambulance. Then they left.

A month later, Carter had no money, no car and nowhere to go, so he walked downtown to the public library. He had just been released from jail after a sheriff’s deputy found him in the Walmart parking lot. He was passed out on Xanax in his car, broken wiper blades scraping across a dry windshield.

The deputy ran Carter’s name, found a probation violation warrant on a fraud charge and took him to jail. The deputy would have found a safe full of drugs locked in the trunk had he searched the car.

Once at the library, Carter called the man who had overdosed at his place, the one he carried out to the trash. There were no hard feelings. After all, Carter made sure the guy didn’t die.

The man offered Carter a ride to the motels on the city’s north side, where they did heroin together.

‘I was kind of fighting it’

Dozens of people are crammed into a small courtroom at the Charlotte T. Zietlow Justice Center on a Wednesday morning in February.

They fill the seats of the gallery, stand crowded in the back and sit on the floor in the space before the judge’s bench normally reserved for attorneys. Case managers sit at tables intended for the prosecution and the defense.

Jail inmates fill the jury box and listen to the early morning testimonials. This is drug court.

They work in restaurants, at dry cleaners, in construction. They are parents and grandparents. They are cancer survivors. They struggle with changes to bipolar medications and complain about the sinus infection that’s going around. Even the judge who presides over drug court is out sick.

When their names are called, they stand, take steps forward. They share stories about recent successes and achievements. They speak to the power of accountability and structure. There’s a lot of clapping.

Carter wears his work uniform, car mechanic blues. He’s got the most rewarding job he’s ever had, one that comes with regular raises, respect and responsibility. His boss trusts him with taking cash deposits to the bank.

Valentine’s Day was the eight-month anniversary of Carter’s sobriety. “Fourteen or 15, last time I was clean,” the 34-year-old says when it’s his turn in drug court. He graduates from an aftercare treatment program in a week and works the 12 steps.

“Before, I was kind of fighting it. Not embracing it,” Carter says of the work to stay sober.

“The journaling helped,” he adds.

Three months into the drug court program, Carter relapsed on Suboxone, the prescription opioid used to wean addicts off heroin that doesn’t pack the same punch as methadone.

He spent 45 days in jail followed by a stay at Centerstone’s Recovery Engagement Center. Monday mornings were spent at the justice building with a workbook developed by mental-health professionals called The Change Companies.

Pen to paper, Carter came to recognize relapse warning signs, problem thinking and addiction behaviors. He detailed his issues with not following rules and taking shortcuts. He admitted he had become the man he never wanted to be.

Arrogant. Impulsive. Full of excuses. A con man out ripping and running. A drug dealer so deep in denial he considered himself a user with good morals because he refused to take food stamps as payment for drugs and children were never involved.

“I’m ready to change that. Not only in drug court, but in life as well,” he wrote.

Carter looked at heroin and the needle with disgust in the years he kept secret his addiction to prescription opioids.

He popped or snorted whatever he could get and tried it all, always on the hunt for something stronger to combat his high tolerance.

Carter suffered the deep muscle and joint ache of withdrawal every morning. He was five or six years into the pills. He needed something that would last days before the pain set in.

He upgraded to liquid methadone.

Carter spent a year buying from people he called “legal dope pushers,” local addicts established at methadone clinics north of Bloomington who sold their “take homes” for $7 a dose. He’d drink 10 at a time and stay high for two days.

He tried to kick his methadone habit in the summer of 2012 after a relationship ended. The couple had used together and fueled each other’s addictions. The methadone was one of the wedges that drove them apart.

Carter drank to dull the hurt, but the pain settled too deep and took over. He’d rub his legs incessantly, trying to massage away the cramps that left him nauseated and sleepless for two weeks.

Quitting didn’t last long. Before he turned 30 that November, he was eating entire strips of Suboxone offered by friends who knew he was hard up to find methadone.

Carter partied at a friend’s house on New Year’s Day 2013. He brought along his beloved pit bull Tyson. The party continued into the next day, when his friend brought out the meth.

The pills, the methadone and the Suboxone amplified everything. The more potent the opioid, the harder he’d speed. He could stay amped for days as long as he kept busy and moving, nodding off once he sat still.

After snorting the first line of meth, “The flame just went ablaze,” he recalled.

The friend had drug connections in Indianapolis; Carter had a car. He could stay high on meth for free if he sold. Heroin was just as a cheap and easy to get, and there was always demand back in Bloomington.

The lure would prove too much.

And when he developed a high tolerance to the meth, just like the Suboxone and the methadone and the pills that came before — Carter turned to the heroin he had always feared. Afraid to die, he rationalized snorting heroin was safer than shooting up, so he never did.

The year Carter started hard drugs, he married a woman he met while running dope to her house during a deal.

She loved the needle.

“My wife, I used to despise her for her heroin love. I would never shoot it, because of what that did to her,” he said.

Carter filed for divorce while he was in jail the summer of 2015.

He lost Tyson, the puppy he raised from a litter he bred, while he was in jail. The pit bull got picked up by animal control, taken to the shelter and eventually put down.

‘I’m my only obstacle’

Carter brokered a deal the weekend he relapsed last summer. He had a truck to sell that he bought and repaired to flip for profit.

He had permission to stay out until midnight on the Friday of a long holiday weekend on account of his hard work in drug court. Officials rewarded his progress with a later curfew, giving him time to put final touches on the truck.

With money in his pocket and time on his hands, he went to a buddy’s house. The guy had Suboxone.

Carter schemed. He crunched numbers in his head, calculated to the minute the half-life of the prescription relative to his next possible drug screen.

He easily passed a drug test earlier that morning. He’d been sober for three months. With the long weekend ahead, he figured he wouldn’t have to take another piss test until Tuesday. Plenty of time for the Suboxone to leave his system.

But Carter was given a drug test that night as soon as he returned to the men’s residential program at Amethyst House. His calculations didn’t account for human error: he mistakenly told house officials he’d be home by 10. Now he was two hours late, and a new employee needed experience administering drug tests.

Getting caught after the relapse knocked him down a few pegs. It was humbling, he said, maybe the best thing that ever happened.

“I needed to learn from that relapse. I needed that re-adjustment of going back to jail to really put sobriety into perspective.”

He realized that in his first attempt at sobriety, he had been arrogant and “living above the world,” not in it.

He had to come to peace with himself: “I’m my only obstacle. I am the only one who can take it away from me. And I can’t allow that to happen, losing this peace. There’s too much to lose at this point, and it’s not losing a few things. It’s losing everything.”

As a condition of remaining in drug court, Carter was released from the jail to Centerstone’s Recovery Engagement Center, where he lived for 10 weeks. The court mandated he take the journaling program and attend three Narcotics Anonymous meetings a week.

He goes to four or five. The people in the program are like family.

“There’s just something about us that makes us shine in a different way,” he says.

“I’m an addict. I’ll say it proudly. I’m a better person for it. Addicts who make it out, that actually get out and succeed in life, it’s like they have a broader perspective. I see the world as a whole now.”

A red 1997 Chevrolet Camaro is parked in the driveway of the rental house Carter just moved into from his sister’s mobile home down the street.

From his driveway, Carter can see into his neighbor’s garage windows. The neighbor is a car guy, too. They’ll get along, Carter says.

The Camaro has some body damage, and Carter plans to spend a Saturday afternoon driving to Indianapolis to search for replacement parts and automotive supplies.

It has a V8, but nowhere near the horsepower for the speed he craves. He wants to rebuild the engine from scratch, see if he can ramp up the horsepower to 450.

He knows car restoration projects can evolve from a weekend hobby into an expensive addiction.

But he just wants to drive, fast and free.

Note: The Full Article link above requires log in, here is the full Article (without pictures) in a PDF document.