Chicago Tribune on 1/6/2020 by Alexandra Kukulka 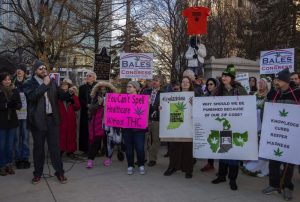 He was prescribed opioids to help with the pain. But, to avoid the negative side effects of opioids, Chandler said he decided to take cannabidiol-based products instead.

“CBD helped me get off opioids and it saved my life,” Chandler said.

Chandler, who runs Willy’s CBD Works in Crown Point, sang an original song about legalizing marijuana in Indiana at a Monday rally at the Statehouse in Indianapolis.

Roughly 75 state legislators and advocates gathered, ahead of the start of the 2020 legislative session, as part of an Indiana chapter of National Organization for the Reform of Marijuana Laws and other pro-cannabis organizations state-wide rally for marijuana reform.

The advocates in the crowd, holding signs including “You can’t spell healthcare without THC” and “Healers not dealers,” shared similar stories to Chandler’s: After an accident or to treat an illness, they were prescribed a high amount of opioid drugs. The opioid drugs weren’t helping, and they were worried about becoming addicted or overdosing.

But, according to the advocates, after taking CBD-based products or smoking marijuana, they feel better and beat the illness and pain.

“I am not a criminal,” the advocates chanted at one point. As the speakers talked at the rally, two men from Indy Cannabis Health Dispensary passed out free joints.

The rally kicked off with Sen. Karen Tallian, D-Ogden Dunes, who has been an advocate for the legalization of marijuana, said she learned over the summer from the Association of Indiana Prosecuting Attorneys that in 2018 there were 22,000 arrests in Indiana for marijuana possession.

“It’s the second most arrested crime in the State of Indiana, and it needs to stop,” Tallian said. “There’s no reason on God’s earth that why we should still be arresting people for possession of marijuana.”

The Statehouse “is in the press,” Tallian said, because Michigan and Illinois have officially legalized recreational marijuana, while Kentucky and Ohio are also looking into the issue.

“We are now well behind the times in the State of Indiana,” Tallian said, before pausing to inhale the marijuana-scented air.

On the marijuana front, Tallian said she has proposed three bills for the 2020 legislative session: decriminalize possession under 1 ounce, create a commission to regulate cannabis and correcting a bill from last year related to smokable hemp.

Tallian said marijuana won’t be legalized in Indiana during the 2020 session. But, she hopes the state legislature “will actually listen and understand” that people shouldn’t be prosecuted for marijuana possession.

“I’m going to be very honest with you, we’re not going to get marijuana legalized in this statehouse this year. It’s not going to happen. But, we’re pushing,” Tallian said. “You have to keep doing things one step at a time.”

William Henry, chairman of Indiana NORML, said that “things are changing” around Indiana, but not in the state. He reminded the crowd that change also happens in polling places.

“The ballot box is going to be where a lot of decisions are made in 2020 in the State of Indiana,” Henry said. “If nothing does get done here at the Statehouse for cannabis reform, you’re going to see a change … in these offices with new people standing up for the right thing and doing the right thing for their constituents.”

Jeff Staker, of Hoosier Veterans for Medical Cannabis Inc., told the crowd he has been a medical cannabis patient since 2016. Before then, he used opioids for about 10 years through the United States Department of Veterans Affairs “and running the risk of accidentally overdosing.”

Two years ago, Staker said he talked to state officials about how the opioid crisis is impacting veterans and how cannabis could help prevent death by overdoes or suicide after they stop taking the opioids.

“The governor’s holding the smoking gun, and our legislators are not off the hook either because they gave him the ammo,” Staker said.

State Rep. Michael Aylesworth, R-Hebron, said he supports medical marijuana because, according to a study he and his staff conducted, 66% of his district supports it.

Aylesworth said he understands “the popularity” of recreational marijuana, but that he supports Gov. Eric Holcomb’s position that marijuana should be regulated at the federal level.

“I want to see the feds do this first,” Aylesworth said.

Bosma, who will not be seeking reelection at the end of the session, said he has heard from other legislators in states that have legalized marijuana that there are negative impacts after legalization, like students taking marijuana to school.

“It’s time to sit and see how this shakes out, but after March my objection to it won’t matter,” Bosma said.

But Henry, of Indiana NORML, said he hopes people at the rally and advocates meet with their local legislators and officials to build momentum around marijuana reform.