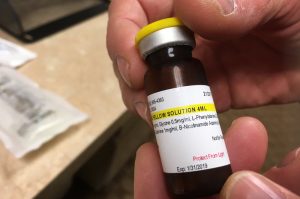 Jason was hallucinating. He was withdrawing from drugs at an addiction treatment center near Indianapolis, and he had hardly slept for several days.

“He was reaching for things, and he was talking to Bill Gates and he was talking to somebody else I’m just certain he hasn’t met,” his mother, Cheryl, says. She remembers finding Jason lying on the floor of the treatment center in late 2016. “I would just bring him blankets because they didn’t have beds or anything.”

Cheryl had taken Jason to the clinic out of desperation. Jason, now in his late 30s, has struggled with addiction since he was a teenager. Cheryl saw his drug use escalate after he was prescribed a benzodiazepine for his anxiety, and he eventually began using heroin and meth. Over the years, Jason would try to get into recovery, but treatment programs didn’t help him for very long.

“I thought he was going to die,” Cheryl says. (Side Effects and NPR are using only first names because Jason worried he would lose his job if his employer found out about his addiction history.)

In late 2016, she saw a local TV news segment about a clinic called Emerald Neuro-Recover. The staff there treats addiction with something called NAD therapy, an IV infusion that can contain amino acids and other nutritional supplements, including nicotinamide adenine dinucleotide, a compound found in living cells.

The infusion, which is delivered over 10 to 15 days, cost $15,000, and it wasn’t covered by insurance. But the TV report said Emerald’s treatment was “proven to wipe drug cravings away.” Cheryl was intrigued.

Emerald and dozens of other companies across the U.S. say NAD therapy can address conditions from anxiety to depression to chronic fatigue and even Alzheimer’s.

And clinicians offering the treatment say that it reduces or stops cravings for alcohol or illicit drugs in up to 90 percent of patients. The treatment has gained attention on addiction recovery blogs and in the mainstream media.

But such claims about NAD therapy and addiction are not supported by scientific evidence, and they may conflict with federal and state regulations against deceptive marketing of medical treatments. Emerald and other addiction treatment clinics use these claims on websites, social media and in the news to attract clients looking for help. Emerald even used patients’ stories to promote the therapy — in some cases, more than a year after the patients returned to using illicit drugs.