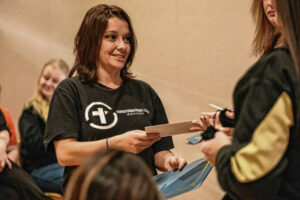 Mike Wolanin | The Republic Paige Sneed receives a certificate and gift card for graduating the Women Recovering with a Purpose (WRAP) program during a graduation ceremony in the Cal Brand Meeting Room at Columbus City Hall in Columbus, Ind., Wednesday, Nov. 30, 2022

A group of women who at one time had been incarcerated at the Bartholomew County Jail completed a one-year program with the hope of providing higher quality lives for themselves and their families.

After completing the “Women Recovering with a Purpose” (WRAP) program Wednesday, 10 female graduates join a total of 227 women accepted into the intensive one-year program since March 2011. The goal of WRAP is to help women with substance abuse disorder turn their lives around, maintain sobriety and refrain from additional criminal activity.

More than 70 people gathered Wednesday in the Cal Brand Meeting Room at Columbus City Hall for the WRAP graduation. Later the same day, a separate ceremony was held for three men who have completed the “Recovery Enables a Life for Men” (REALM) program.

WRAP and REALM are both comprehensive, evidence-based addiction treatment programs, according to Bartholomew County Director of Community Corrections Rob Gaskill. For the first six months, participants are housed in an 82-bed residential facility maintained by Community Corrections separated from the jail, he said. During this first phase, they attend classes from 8 a.m. to 5 p.m. five days a week, Gaskill said.

At this time, Community Corrections has five different curriculums used in the men’s program, and four in the women’s program. If participants successfully completed the six-month residential portion of the program, they are placed in after-care services located in residences within the community. During that time, staff members check in with participants three to five times a week for the remaining six months.

In the WRAP program, success is rooted in the ability to get at the deeper issues affecting each woman’s behavior — often physical, sexual or childhood abuse that has not been addressed.

“Recovery starts with the realization that your life is in shambles, and you have to change it,” Gaskill said.

While public support can vary, the numbers are impressive. For example, 69% of all women who have started WRAP are graduates that remain active with the program. When Wednesday’s graduates were added, 144 female participants had graduated from the one-year program. Another impressive statistic is that a WRAP participant reduces her chances of becoming a repeat offender by 30%, Gaskill said.

In REALM, a successful completion of the one-year men’s program reduces a participant’s chance of becoming a repeat offender to nearly 55%, he said. The men’s program didn’t begin until 2019 and was negatively impacted by the COVID-19 pandemic, so their figures are not complete at this time.

For his efforts, Gaskill was recently honored at the state level by being named the 2022 Director of the Year by the Indiana Association of Community Corrections Act Counties.

So what do some recent graduates think about the WRAP program?

“The toughest part was having to face certain facts about yourself and your past, and I was struggling with a lot of trauma while going through WRAP,” program participant Ashley Shuffitt said. “But I’ve been sober for six-and-a-half months now. I just have a lot of self-peace and happiness now.”

Another graduate, Paige Sneed, has displayed enough progress that she was appointed a house manager for Transformational Living Ministries (TLM). Sneed says she now resides with seven other women in the sober-living halfway house.

Getting through the one-year program was extremely hard, Sneed said. When asked what difference she sees in herself from her arrest to her graduation, her reply was “I got here.”

A third graduate, Christy Walker, said the toughest part of WRAP is being honest with yourself about your addiction, as well as the pain you have put your family through.

“Now, I’m a better human being,” Walker said. “I’m not as judgmental. I’ve learned to be more patient. I’m a lot happier as a person.”

Going through the program has helped Walker move from the service industry into a better-paying manufacturing job, she said. The change in work environment also helps her maintain a sober life, she said.

The new graduates of both WRAP and REALM will not be on their own. They will have to undergo annual evaluations for the next three years to ensure they have not relapsed.

And if help is needed, all graduates can find assistance through support groups collectively known as the Winner’s Circle. One of the REALM group leaders, Billy Stillabower, says the men in his group form a type of brotherhood that includes learning to rely on each other.

“You become like family,” Stillabower said. “If someone needs help to stop them from getting involved in drugs or getting in trouble with the law, I’ll be there. And I know if I’m in danger of relapsing, they will be there for me.”

Both WRAP and REALM are operated under the supervision of Bartholomew County judges, Gaskill said.

“We’ve very thankful that our judges have allowed us to implement and to operate programs like WRAP that are making a difference,” Bartholomew County Director of Court Services Brad Barnes said. “We are not just warehousing people in a correctional facility. We are making change for individuals, their families and our communities.”

Bartholomew County’s WRAP program has been used as a model for several other communities across the country.