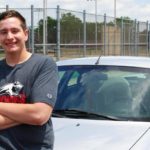 Drake Abramson is quick to pull out his wallet and show off his new driver’s license.

It’s something the Lake Station teen has been looking forward to. Earlier this month, he graduated from high school and went to prom. His grandfather helped him buy a car, and at 19 years old, he was able to manage his epilepsy and get his license before heading off to the University of Indianapolis in the fall.

Abramson hopes other Hoosiers with epilepsy will have similar opportunities, thanks to a bill passed last session in the Indiana General Assembly, he said.

Gov. Eric Holcomb signed the law April 26, allowing some epilepsy patients to seek cannabidiol, a cannabis compound, as treatment. As the bill was drafted and amended, Abramson spoke before the Public Health Committee in February about why he felt it should be passed.

“People don’t even know how huge this is for people in the epilepsy community,” Abramson said.

He had his first recognized seizure on the football field in seventh grade, Abramson said. He went to hike the football to the quarterback when he “went on on autopilot and blanked out,” he said. When he came out of the seizure, his teammates were frustrated because he didn’t snap the football and his coach wondered if he had a concussion, he said. Abramson said he later learned he had complex partial seizures.

“I kind of just blank out, and I wander around,” Abramson said.

It was tough in the early months as Abramson learned to take medication daily, something he wasn’t used to, and tried to find a prescription that worked best for him. One of his first medications had some severe side effects, and he said it was “horrible,” as he went to “gym class dizzy almost every day” and had “anger outbursts with everyone in my family.”

“One day, he ran outside, and there was about a foot of snow on the ground, and he was just in shorts and nothing else, and he just started screaming outside. And I said, this is not my son,” Jennifer Abramson, his mother, said.

Luckily, they got him another medication that’s been working better, the mother and son said, but they know it could still have lasting effects on Drake Abramson’s liver and kidney.

While they don’t yet know if he is a candidate for cannabidiol in Indiana, they said they are excited what it could mean for people who have run out of treatment options.

Rep. Charlie Brown, D-Gary, said, “Drake educated me tremendously on the varying types of epilepsy,” as he talked with the teen and heard him speak about the measure. Brown voted for it.

“It’s really, really a positive that a young man has now wanted to educate not just others that have epilepsy but the general populace about the trials and tribulations,” Brown said.

Drake Abramson said, “I’m not going to say that this new medication coming out, the CBD oil, is going to be perfect for everyone because it’s not. Everyone’s body’s different. But having this different option out there, this natural alternative, it will help a lot of people.”

While there’s been some promising research, such as a clinical trial to see how it could help children with epilepsy, there’s more to do to fully understand how it works, said Professor Andrea Hohmann of Indiana University’s Department of Psychological and Brain Sciences.

That’s been difficult to do since it is classified as a Schedule 1 drug, Hohmann said, which the Drug Enforcement Administration defined “as drugs with no currently accepted medical use and a high potential for abuse.”

Jennifer Abramson said she can understand how a parent, before Indiana lawmakers approved the measure, would uproot their lives and move to another state to find treatment that works, no matter how difficult it may be.

“As a parent, when you see your child suffering, if his seizures weren’t well controlled on medication, I would have already been long gone to have that for him,” she said.

Unlike THC, cannabidiol is non-intoxicating, meaning it doesn’t give the high people associate with marijuana, Hohmann said. The new Indiana law specified that the cannabidiol cannot contain more than 0.3 percent of THC.

The law also creates a cannabidiol registry for patients and caregivers, which would be accessible by law enforcement agencies. Concerns were raised as the bill was drafted about how prosecutors and police might respond if the proposal became law. But there are protections for law-abiding citizens.

Brown said there are still “major hesitancies by many of my colleagues” who associate the plan with medical marijuana. Given the “conservativeness of the state of Indiana,” it may take some time before some people come around to thinking of it as a medical option. Nevertheless, he sees it as a “step in the right direction,” he said.

The law takes effect July 1, and CBD oil already is being sold and advertised, including at Indiana Botanic Gardens in Hobart.

On Thursday, Drake Abramson, who plans to major in political science, went to his college orientation. Down the road, he wants to “be a public servant in the region” by becoming a lawyer, running for Congress and, possibly, one day governor, he said.

Even if Drake Abramson doesn’t qualify for cannabidiol, he said he’s excited for the people it could help who struggle with seizures every day.

“Just think of how many more people are going to be able to go and start getting their driver’s license, being able to go out and get jobs, and just start giving back to Indiana once they’re on a medication that works, hopefully, you know?” he said.